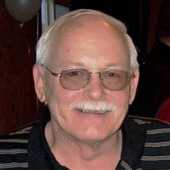 Drew C. Geyer was born August 28, 1949, to Louis and Donna (Saewert) Geyer in Grand Forks, ND. The family moved to Fargo, ND, when Drew was a child. He graduated from Fargo North High School in 1967, and attended Dakota Business College.

On January 23 1971, Drew was united in marriage to Joan Terhark. Shortly after that, he was drafted into the US Army.

Drew and Joan had two children - Nicole Geyer and Aaron Geyer. He worked at Fairmont Foods, and then he worked as a salesman for a company selling automotive fastening devices until he retired in 2015.

Drew loved spending time at the cabin on Lake Melissa. He especially enjoyed the quiet times in early spring and late autumn. A favorite thing for Drew and his family was the walleye fry on Sunday morning at the lakes. He also enjoyed the dogs in his life - Franki May; and grandpuppies ZG and Apollo III.

Drew is survived by his wife Joan Geyer; their children, Nicole Geyer and Aaron Geyer; and his sister, Kari Olander; and many nieces and nephews.

He was preceded in death by his parents; and his brothers, John Geyer and Thal Geyer.

Visitation will begin at 12 PM, with a Life Celebration service at 1 PM, Monday, August 5, 2019, in Korsmo Funeral Chapel, Moorhead, MN.

To order memorial trees or send flowers to the family in memory of Drew Geyer, please visit our flower store.