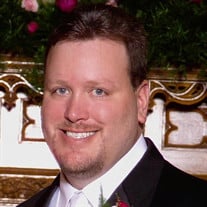 Thomas A. Schmitz, age 53, of Ypsilanti, ND, formerly of Fargo, ND, and Jamestown, ND, died Thursday, July 15, 2021. Thomas Alan Schmitz, the third child of Robert and Carol (Sebens) Schmitz, was born in Minneapolis, MN, on May 22, 1968. The family lived in Brooklyn Center, MN, Lemmon, SD, Milnor, ND, and later moved to Fargo, where Tom graduated from Fargo South High School in 1986. Tom, over time, attended NDSU School of Pharmacy, where he received his doctor of pharmacy in 2005. On June 23, 2007, Tom married Rachelle Neevel in Fargo. Tom and Rachelle lived in Eagan, MN, and in Fargo, before moving to Jamestown, ND, in 2015. In January of 2020, the family moved to Ypsilanti. Tom was currently employed as a pharmacist at Jamestown Regional Medical Center. Tom was a bow hunter, and a fan of the NDSU Bison, Carson Wentz, and the Minnesota Vikings. He enjoyed watching “car shows.” He was very tender-hearted and loved his family and time spent with them. He loved playing “tickle monster” with his kids on the trampoline. He also treasured time with old buddies. Tom is survived by his wife, Rachelle of Ypsilanti; four children, Lexi, Mckenzie, Jaxon, and Colton; his parents, Carol and Bob Schmitz, of Fargo; a brother, Mathew; and two sisters, Lori (Steve) Rodgers and Jodi (David) Pavek. Tom’s funeral will be Thursday, July 22, 2021, at 10:30 AM, in Connect Church, Valley City, ND. He will be buried in Riverside Cemetery, Fargo. Arrangements by Korsmo Funeral and Cremation Service, Moorhead, MN.

The family of Thomas A. Schmitz created this Life Tributes page to make it easy to share your memories.

Send flowers to the Schmitz family.