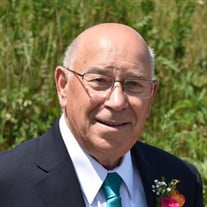 To view Harvey's Service, please follow the link below: https://portal.midweststreams.com/services/watch/20w9dUT4DF Harvey Stanley Larson, the second of seven children and the oldest son of Adolph and Clara (Olson) Larson, passed away on October 14, 2021, at the age of 85. Born on September 3, 1936, in a farmhouse near Ulen, MN, Harvey was raised on the family farm where he learned the value of hard work and gained an appreciation for the outdoors. Harvey attended school in Ulen and was active in 4H during his childhood where he showed award-winning Hereford cattle. He was baptized and confirmed at Keene Lutheran Church. As a young man Harvey left the farm to work on Minnesota’s Iron Range, before spending time as a miner in the mountains of Montana. He returned to the Red River Valley in 1956 when he started a new career with Hanson Brothers Construction, where he was respected for his meticulous craftmanship as a finish carpenter building cabinets and other woodworking. Harvey spent 45 years with Hanson’s before retiring in 2001. On June 27, 1959, Harvey married Shirley Mae Lee and the couple remained together for 62 years. He was a diehard Minnesota Twins, Vikings, Lynx and Timberwolves fan, and a member of Our Saviors Lutheran Church since 1961. Harvey and Shirley spent all but a decade of their married life living north of Moorhead in a home Harvey built by hand with the help of their friends, where they raised their children Brian and Jennifer. Harvey, who had a natural ability to create objects out of wood and seemingly fix anything mechanical, took great pride in keeping his yard immaculately maintained. In January 2021, Harvey was diagnosed with amyloidosis, a rare blood disease that created too much protein for the body to process and causing him to lose strength. In late September, Harvey started hospice care at home before moving to the Sanford Hospice House on October 6, where he received excellent care from the hospice staff before passing away at 3:05 am on Thursday, October 14, 2021. Harvey is survived by his wife, Shirley; son, Brian (Kay) Larson of Bismarck, ND; daughter, Jennifer (Joel) Warner of Andover, MN; and their four beloved granddaughters, Emma Larson of American Fork, UT, Mabel Larson of Bismarck, Taylor Kjeldsen of Andover, and Brooke Kjeldsen of Andover. Harvey is also survived by his four sisters, Arlene Meyer, Barbara (Jerry) Krabbenhoft, Linda (Bruce) Tinjum, and Judy Lucas; two brothers, Gordon (Marion) Larson and Jeffrey (Marilyn) Larson. Harvey was preceded in death by his parents, Adolph and Clara Larson; and brothers-in-law, Roger Luthi, Elwood Meyer and Roy Bixby.

To view Harvey's Service, please follow the link below: https://portal.midweststreams.com/services/watch/20w9dUT4DF Harvey Stanley Larson, the second of seven children and the oldest son of Adolph and Clara (Olson) Larson, passed away on October... View Obituary & Service Information

The family of Harvey S. Larson created this Life Tributes page to make it easy to share your memories.

To view Harvey&#39;s Service, please follow the link below:
https://portal.midweststreams.com/services/watch/20w9dUT4DF