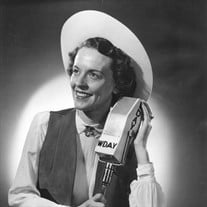 To join Dorothy's Celebration of Life on Saturday, July 17 at 10am, please follow the link below: https://portal.midweststreams.com/services/watch/7872655rn Dorothy Fandrich, 96, was attended by her children as she passed peacefully on December 16, 2020. Dorothy was born on January 7, 1924, to Wallace and Jennie Venard. She grew up on a farm near Graceville, MN, where she taught herself to yodel and play guitar. While a junior in high school, she was asked to join the WDAY Hayloft Jamboree after winning a talent competition at Browns Valley in 1939. She moved to Moorhead in 1941 and graduated from Moorhead State Teachers College in 1945 with a degree in education. Meanwhile, she continued working at WDAY, where she was known by her stage name, “Linda Lu”. She performed solo and with ensembles, including the popular Co-op Shoppers, who entertained on radio and at events throughout the region from 1943 to 1966. She left WDAY in 1968 and taught Phy Ed at North Junior High in Moorhead until she retired in 1989. Dorothy enjoyed outdoor activities and travel. She visited all 50 states, Canada, Germany, and Australia. She was also an active member of First Congregational Church in Moorhead and involved with several charity organizations. Dorothy married Daniel Fandrich in 1949 and they remained happily together for 59 years. They had four children. Dorothy’s passing was preceded by her husband, Dan, and son, Craig. She is survived by her daughters, Willa-Jean (Ron) Zayic of Ogema, MN, and Andrea (Rick Corey) of Moorhead; and son, Blain (Jan) of Billings, MT. Dorothy is also survived by four grandchildren - Travis, Garret, Megan, and Myles - and four great-grandchildren. A memorial service for Dorothy will be held Saturday, July 17, 2021, at 10am in Korsmo Funeral Chapel, Moorhead. Dorothy’s service can be viewed via livestream by visiting her obituary page at www.korsmofuneralservice.com.

To join Dorothy's Celebration of Life on Saturday, July 17 at 10am, please follow the link below: https://portal.midweststreams.com/services/watch/7872655rn Dorothy Fandrich, 96, was attended by her children as she passed peacefully on December... View Obituary & Service Information

The family of Dorothy A. Fandrich created this Life Tributes page to make it easy to share your memories.

Send flowers to the Fandrich family.