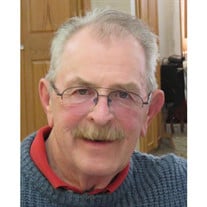 Dennis Marvin Kvanvig, 73, Moorhead, MN, passed away unexpectedly at work on Thursday, December 2, 2021. He was born in Bismarck, ND, to Arthur O. and Julia (Severson) Kvanvig on August 27, 1948, and grew up in Hettinger, ND. He attended Hettinger public schools and worked at the Hettinger Red Owl and Halverson’s SuperValu. He also helped with custom combining. Dennis attended NDSU for one year and then was drafted into the army where he served in Vietnam until the spring of 1970. After leaving the army he lived in Fargo, ND, where he attended Dakota Business College. There he met Marie Wienckowski. They were married August 29, 1970, and they had three children. Dennis worked his entire career in the food distribution industry. He worked at Hornbacher’s grocery store and then with Barrel of Fun in Fargo. He was transferred to Bismarck, ND, where he later worked for Campbell’s Soup and then Planter’s/Nabisco. He then transferred to Rochester, MN. His last career move to Crossmark Foods brought him back to Moorhead where he and his family have resided the for last 26 years. While in Moorhead, he thoroughly enjoyed his part-time side hustle where he worked for the last 21 years making and delivering pizza at Papa John’s. When he wasn’t delivering pizza, you could find him enjoying his “Uff-Da deck” overlooking the Red River where he loved hosting bonfires for friends and family to enjoy. He was active in North Buffalo Lutheran Church where he served on the church council, including as president, and where he made sure his grandsons were also active. He was known for telling Ole and Lena stories, was a bit of an artist, loved crossword puzzles, bringing coffee to his mom at the nursing home, enjoying his family, grilling and his world-famous peanut brittle. He was the designated camp cook during the Uff-Da expeditions for hunting and fishing. His favorite place to be when the weather was nice was out on the deck enjoying his backyard. He is survived by his wife Marie; children, Mike (Susan) Kvanvig, Michelle (David) Sherven, and Angela “AJ” (Ryan) Nannenga; grandsons, Brandon and Dylan Kvanvig, Jerry and Jack Sherven, and Jaydon, Zackary and Wyatt Nannenga; siblings, Russel (Geri), Lynda (Bob) Backman, Steve, and Amy Mason; and numerous nieces, nephews and cousins. Dennis was preceded in death by parents Arthur and Julia Kvanvig; brothers, Ardy “Pete”, and Dan; a sister, Karol; and a nephew, Tom, his wife, Stacie, and their son Daniel. Visitation for Dennis will begin at 10 AM, with a Life Celebration Service at 11 AM, Saturday, December 11, 2021, in North Buffalo Lutheran Church, rural Kragnes, MN.

Dennis Marvin Kvanvig, 73, Moorhead, MN, passed away unexpectedly at work on Thursday, December 2, 2021. He was born in Bismarck, ND, to Arthur O. and Julia (Severson) Kvanvig on August 27, 1948, and grew up in Hettinger, ND. He attended... View Obituary & Service Information

The family of Dennis M. Kvanvig created this Life Tributes page to make it easy to share your memories.

Send flowers to the Kvanvig family.