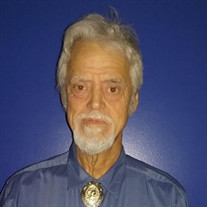 Clayton E. “Lobo” Smeltzer, 64, of Moorhead, MN, died Monday, June 14, 2021, under the care of hospice in Bethany on University, Fargo, ND. Clayton Eugene Smeltzer was born November 16, 1956, in Detroit, MI, to Luther and Mary (Moidja) Smeltzer. Clayton grew up in several communities in the southwest as his parents were truckers and followed where the work was. He graduated high school in 1975 from Oakland High School in Oakland, IA. Clayton attended college in Bozeman, MT studying law, but after a year he decided that he wanted to pursue other options. Clayton spent his life in various occupations. After relocating to North Dakota, he was a parts man at Sturdevant’s Auto, where he enjoyed visiting with patrons about their projects. The job he was fondest of was working for Dan's Oil North (Fargo, ND) as the store manager. He would have daily visits from his “coffee club” and loved working with the public. He was employed by Dan’s Oil until the North station closed. Clayton went on to work for the Moorhead Post Office until his declining health prevented him from working. Clayton “Lobo” had a passion for adventure and crazy driving. He once thought he could make his 1973 Mach III Mustang fly by driving at a high speed while jumping an embankment. While he and Deanna walked away from the experiment in one piece, the Mustang did not survive. Clayton had an outgoing personality, but preferred being a “lone wolf” (Lobo). He was a devoted friend to those he considered close. Clayton ventured to North Dakota in 1977 where he met Deanna (Bruns) Brakke. The couple was united in marriage on August 26, 1978, at St. Andrew’s church in West Fargo, ND. They had two daughters and moved to Arlington, TX in 1980, where their son was born. The family relocated to West Fargo, ND, in 1988. Clayton and Deanna divorced in 1991. A short time later, Clayton met and formed a long term relationship with Kimberly Thompson. After several years , the couple had a daughter born July 21, 1996, in Fargo. During this time they resided in Horace, ND. Kim and Clayton amicably separated in 1998. In 1999, Clayton met Rebecca Mjelde in Moorhead. The couple fell in love and were spiritually united in marriage on August 4, 2000. They made their home in Moorhead. Clayton and Becky enjoyed their life together, spending time with each other at music concerts and traveling, as well as spending time with family and friends. Clayton and Becky took over custody of Jakobe Smeltzer, the couple’s grandson. Becky peacefully passed from this earth June 6, 2012. He is survived by his children, Andrea (Al) Wayman of Sheldon, ND, Cynthia (Clint) Arndt of Hankinson, ND, Daniel (Cheryl) Smeltzer of Moorhead, and Nicole (Michael) Headland of Ypsilanti, N.D.; his grandsons, Christopher Arndt, Fargo, ND, Samuel Arndt, Hankinson, ND, Jakobe Smeltzer, Moorhead, MN, Alexander Wayman, Sheldon, ND, and Mackenzee and Myles Headland, with baby boy Headland #3 due November 29, of Ypsilanti, ND; his sister, Deborah Olson of Madelia, MN; his brother, Jeffrey Smeltzer of McKinney, TX; his mother-in-law, Norma Mjelde; and several nieces and nephews. He was preceded in death by his wife Becky; parents, Luke and Mary Smeltzer; sister, Donna Smeltzer; brother-in-law, Terry Olson; grandson, Ryder Smeltzer; and nephew, Jon Olson. A Gathering for Friends for Clayton will begin at 10:00 AM, Monday, June 21, 2021, followed by a Celebration of Life at 11:00 AM, in Maranatha Free Lutheran Church, Glyndon, MN. Korsmo Funeral and Cremation Service, Moorhead, MN)

The family of Clayton "Lobo" E. Smeltzer created this Life Tributes page to make it easy to share your memories.

Send flowers to the Smeltzer family.