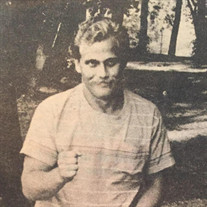 Byron Jay Klevgaard, 62, passed away Wednesday, February 24, 2021, in his home in Moorhead, MN. Byron was born November 2, 1958, in New Jersey, the son of Ron and Cindy (Belden) Klevgaard. He joined the Marines serving from 1976 to 1979, where he guarded embassies and played semi pro rugby in Italy. Byron achieved his GED at North Dakota State University through the Upward Bound program, provided by the Marines. He then attended NDSU after receiving his GED for Civil Engineering in 1981. On October 9, 1982, he was united in marriage to Karen E. Haug in Hope Lutheran in North Fargo. Byron worked at Soderbergs Optical in West Fargo, ND, as an optician for several years before going to work at Hanlon Construction in Fargo, working there until he retired. Since a young age, Byron had an interest in fishing alongside his father and grandfather and, later in life, he fished with his children. In addition to fishing, he started his outstanding love for disc golf in 1985. During his lifetime, Byron competed in several disc golf tournaments where he met a majority of his lifelong friends. Byron is survived by his three children, Brandon Klevgaard, Ashley Klevgaard, and Angela Watson; five grandchildren; his mother, Cynthia Nelson; his brother, Chuck Klevgaard; and his sister, Kristen Saari. A Graveside Service for Byron will be held at 12:00 PM, Saturday, March 6, 2021 in Felton Cemetery, Felton, MN. Following the Graveside Service, a Gathering of Friends will be held at the Felton Fire Hall. (Korsmo Funeral and Cremation Service, Moorhead, MN)

The family of Byron J. Klevgaard created this Life Tributes page to make it easy to share your memories.

Send flowers to the Klevgaard family.