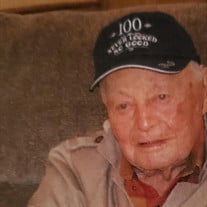 Wallace William Gwynn was born September 15, 1920, in Tomahawk, WI, to John and Emma (Buth) Gwynn. He spent his formative years in Wisconsin, before moving to Minnesota. He married Virginia Gasaway on June 5, 1941, in Sabin, MN. They had three children, Judie, Sandra and Bruce. Wallace enlisted in the US Navy in 1943 and spent two years serving on the Cruiser USS Appalachian, flagship in the southern theater during many major battles. After his discharge, he joined the Fargo Police Department where he served for thirty-six years. He retired as Assistant Chief of Police. After he retired, he and Virginia moved to Pelican Rapids, MN, where they enjoyed many hours of fishing and golf. He was an avid baseball fan, watching all the Twins games. After Virginia’s death in 2009, Wallace moved to Fargo where he lived independently for ten years. He subsequently moved to the North Dakota Veterans Home, in Lisbon, ND, in 2019. Wallace passed away Wednesday, November 25, 2020, at the North Dakota Veterans Home, at one hundred years of age. Wallace was long-known for his positive outlook on life, his patience and his humor. He was a light to everyone who knew him. He leaves behind his daughter, Judie McCarthy; grandsons, Troy Casey and his wife, Charon, and Torey Casey; great-grandchildren, Madeline and Mahina Casey; and sisters, Ruth Jackson and Elaine Barletti. In addition to his wife, Virginia, he was preceded in death by his son, Bruce in 1947; his daughter, Sandra in 2011; and brothers, George and Johnny. No service is planned due to the current pandemic healthcare crisis. A private interment will be held at Fort Snelling National Cemetery in Minneapolis, MN, where he will join his wife, Virginia. The family will gather at a future time to celebrate his life. Arrangements by Korsmo Funeral Service, Moorhead, MN

Wallace William Gwynn was born September 15, 1920, in Tomahawk, WI, to John and Emma (Buth) Gwynn. He spent his formative years in Wisconsin, before moving to Minnesota. He married Virginia Gasaway on June 5, 1941, in Sabin, MN. They had... View Obituary & Service Information

The family of Wallace W. Gwynn created this Life Tributes page to make it easy to share your memories.

Send flowers to the Gwynn family.