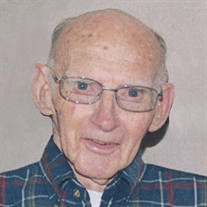 Vernon A. Bancroft Sr. 91, Moorhead, MN, died Sunday, February 16, 2020 in Eventide on 8th, Moorhead. Vernon Albert Bancroft Sr. was born October 16, 1928, in Tracy, MN, to Albert and Gena (Haugen) Bancroft. He attended school in Tracy, graduating from high school in 1946. After high school, Vern attended the University of Minnesota in Minneapolis. Following college, he worked as an accountant for a local farm implement dealer. On July 8, 1950, he was united in marriage to Elizabeth Moncelle in Amiret, MN. Vern joined the Minnesota Army National Guard in 1948 and served on active duty during the Korean Conflict. After his honorable discharge in 1952, he and Elizabeth moved to Moorhead. Vern was employed in the lumber business during his working career. He worked in Fargo, for Twin City Hardwood Lumber Company from 1952-1969, and then for Simonson’s Lumber Company as an Estimator, from 1969 until his retirement in 1990. During his retirement years, Vern enjoyed spending time with his family and woodworking. He has been a member of the Masonic Lodge for 64 years, Sons of Norway for 25 years and has been an active member of 1st Presbyterian Church in Moorhead for over 60 years, serving as elder, deacon and sharing his talents on various committees. He always enjoyed participating on the church’s softball and bowling teams. A highlight of his later years was taking the “Honor Flight” for veterans to Washington, D.C. accompanied by his son, Wayne. Vern will be remembered and missed by his wife of 69 years, Elizabeth; their five children, Gail (Kim) Christianson, Carolyn (Jon) Lybeck, Patricia (Russ) Conrad, Wayne (Lana Jacobson) Bancroft and Kurt (Karla) Bancroft. In addition, he is survived by one daughter-in-law, Gloria Bancroft, along with 13 grandchildren and 8 great-grandchildren. He was preceded in death by his parents; one son, Vernon Jr.; and one sister, Marie Bancroft. A Memorial Service will be held Thursday, February 20, 2020 at 2PM in 1st Presbyterian Church in Moorhead, MN. Visitation will be held one hour prior to service.

The family of Vernon Bancroft Sr. created this Life Tributes page to make it easy to share your memories.

Send flowers to the Bancroft family.