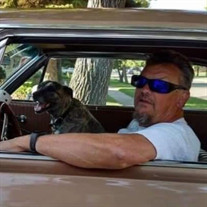 To view the recording of Steven's funeral service click the following link: https://portal.midweststreams.com/services/iframe/23470 Steven W. Tiffany, 70, Dilworth, MN, died Saturday, September 4, 2021, in Sanford on Broadway, Fargo, ND. Steven Warren Tiffany was born March 1, 1951, in Lawndale, CA, to Warren and Lillian (Levine) Tiffany. He graduated from Lawndale High School with the class of 1969. Following high school Steve attended El Camino College until he was drafted into the United States Army. Steve proudly served his country from 1970 until 1973, spending time overseas in Germany. On June 6, 1978, Steve was united in marriage to Deborah St. Aubin in Torrence, CA. They resided in California until moving to Frazee, MN in July of 1989. For 12 years, he worked as a hydraulic mechanic for Northrop Grumman, and when they moved to Minnesota, he worked for Lund Boats for 17 years. Steve always stayed busy and was looking forward to returning as a bus driver for Dilworth-Glyndon Schools. He enjoyed fishing, camping, spending time with his family and riding motorcycles. As Steve often said, “Ride the Ride”. Steve will be remembered and deeply missed by his wife of 43 years, Deborah “Deb” Tiffany; two sons, Paul (Clarinda) Gardner and Scott (Amanda) Tiffany; six grandchildren, Gage Tiffany, Taylor Tiffany, Mason Tiffany, Lucas Edgerly, Jace Edgerly and Isaiah Edgerly; siblings, Nita Moquin, Judy Stout, Peggy Cenisceros, Gary Tiffany and Connie McIntyre; along with several nieces and nephews. He was preceded in death by his parents. Visitation for Steve will be held Thursday, September 9, 2021, in Korsmo Funeral Chapel from 5pm-7pm with a time of sharing starting at 7pm. A Celebration of Steve’s Life will be Friday, September 10, 2021, at 11am in Korsmo Funeral Chapel.

The family of Steven W. Tiffany created this Life Tributes page to make it easy to share your memories.

To view the recording of Steven&#39;s funeral service click the following...

Send flowers to the Tiffany family.