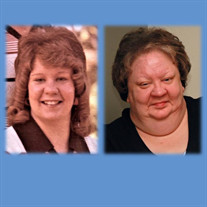 Shirley Marie (Krueger) Sanger, 65, Moorhead, MN, passed away August 26, 2021, surrounded by her family. Over her lifetime, Shirley was a sister, an aunt, a loving and devoted wife and mother. Shirley was also a proud and doting grandmother. Shirley was born April 14, 1956, to Clarence and Irene (Anderson) Krueger in Fargo, ND. She grew up in Moorhead and was a 1975 graduate of Moorhead High School. Shirley continued her education and graduated from Rita’s Cosmetology School. Shirley met the love of her life, Stephen Sanger. They married June 2, 1979, at Our Savior's Lutheran Church in Moorhead. Shirley and Steve made their home in Fargo. They later moved to Moorhead and raised their three sons together there. Shirley worked as a Cosmetologist at Janet’s Beauty Shop, Dilworth, MN. She worked at Fraser LTD as a Direct Care Provider in Fargo. Shirley enjoyed her many years working at Skateland Roller Skating Rink, Fargo. She was an avid dog lover and always opened her home to a dog in need. Shirley loved her family and friends beyond measure, and she also loved “her Betty!" Whenever Shirley was near, one always heard her laughter. Even when she was not feeling her best, she still found a way to share her laughter with us. Shirley was preceded in death by her mother Irene Krueger, her father Clarence, and brother Wayne. Shirley is survived by her loving husband, Stephen, and three sons Christopher, Fargo, Aaron (Tracy) West Fargo, ND and Ryan, Moorhead; two grandsons, Noah and Connor Sanger. Shirley is also survived by her brother, Allen (Joyce) in Canby, MN, and many nieces and nephews who she loved so dearly. Shirley was an active member of her family and friends and will be missed deeply. Visitation for Shirley will begin at 1 PM, with a Life Celebration Service at 2 PM, Tuesday, August 31, 2021, in Korsmo Funeral Chapel, Moorhead. In lieu of flowers, memorials are preferred in Shirley's memory.

Shirley Marie (Krueger) Sanger, 65, Moorhead, MN, passed away August 26, 2021, surrounded by her family. Over her lifetime, Shirley was a sister, an aunt, a loving and devoted wife and mother. Shirley was also a proud and doting grandmother. Shirley... View Obituary & Service Information

The family of Shirley M. Sanger created this Life Tributes page to make it easy to share your memories.

Send flowers to the Sanger family.