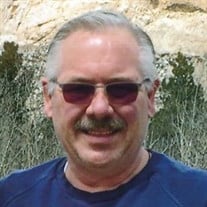 Scott T. Carson, 57, Fargo, ND, formerly of Gillette, WY, died Thursday, December 5, 2019, at his residence and under the care of Hospice of the Red River Valley. Scott Tracy Carson was born February 3, 1962 in St. Paul, MN, to Dennis and Joy (Justesen) Carson. Scott attended school in Gillette and graduated from Gillette Community College with a degree in business. For over 30 years, Scott worked in retail. In 1998, Scott was united in marriage to JoAnn Stecklein. That same year they welcomed their daughter, Sydney. While in Gillette, Scott was employed by Albertson’s Grocery, Smith’s Grocery and Walgreens, where he served as assistant manager and manager over the years. In 2017, Scott was united in marriage to Shan “Emily” Gong in Buffalo, Wy. With his desire to manage Walgreens, Scott enrolled in additional classes and was transferred to Fargo. He completed his coursework and soon after was diagnosed with cancer. Scott loved watching hockey, football, baseball and golf. He followed all of Minnesota sports, especially the Vikings and Twins. Scott was a hard-working man his entire life. He had a wonderful heart and great sense of humor. You could always count on his “life perspective” to cheer you up. Scott was excited to soon be a Grandpa to his grandson, Bentley Meloy, due December 27, 2019. Scott will be remembered and missed by his wife, Emily, of Fargo; one daughter, Sydney Carson (Michael Benson) of Casper, mother, Joy Carson and one brother, Tim Carson, both of Gillette. In addition, he is survived by his close aunts and uncles, Darryl (Betty) Justesen of Detroit Lakes, MN, Chuck (Renee) Justesen of Burlington, NC, Lyndon (Dottie) Carson of Gillette, Janice Smith of Minneapolis, MN, Karen (Dennis) Hermanson of Wisconsin, Karol Plouffe of Temecula, CA, Cheryl (Don) Wiseman of Minnesota, Keith Johnson of Center City, MN., and Ray Schmidt, of Clarksville, TN. A Celebration of Life will be held Wednesday, December 11, 2019, at 3PM in Korsmo Funeral Chapel, Moorhead. A gathering of family and friends will be held one hour prior to service.

The family of Scott T. Carson created this Life Tributes page to make it easy to share your memories.

Send flowers to the Carson family.