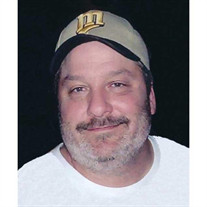 To view Robbie's Celebration of Life on Thursday, February 18, please follow the link below: https://portal.midweststreams.com/services/watch/rA98a4722Y Robbie S. Ball, 56, Moorhead, MN, lost his battle with end stage liver disease on Thursday, February 4, 2021, in his home. Robbie Shawn Ball was born January 21, 1965, in Fargo, ND, to Roger and Judith (Kennedy) Ball. He grew up in Moorhead, graduating from Moorhead High in 1983. At a young age, Robbie knew music was his passion. He started playing the drums and soon realized he could sing and play. Over the years, Robbie played in many different bands. He was an adored singer and drummer by his many musician friends. One of his proudest accomplishments as a musician, was when he and his fellow bandmates opened for Eddie Money. During his working career, Robbie worked as a cook at the Crowbar in Sabin, MN and also for area farmers during harvest. Robbie’s work as a cook made him a patron favorite over the years. Robbie enjoyed the rock band “Kiss”, the Minnesota Vikings and spending time with his family at the farm. His charming personality and gentle spirit will be greatly missed by his friends and family. Robbie is survived by his children, Kayla (Josh) Loge, Jaime (Josh) Heller, and Casey Ball; three grandchildren, Bowyn Loge, Brooks Loge and Finn Heller. He is also survived by his siblings, Carrie Ball, Roger (Terry) Ball, and Randy (Kendra) Ball; along with many nieces, nephews and his beloved dog, Dexter. He was preceded in death by his parents. A public gathering of family and friends will be held Wednesday, February 17, 2021, at Korsmo Funeral Chapel in Moorhead from 5pm-7pm. A Private Celebration of Life will be held Thursday, February 18, 2021, with livestream available to the public at 2pm. To view Robbie's service, please follow link below. https://portal.midweststreams.com/services/watch/rA98a4722Y Robbie will be laid to rest in Moorhead Memorial Gardens, Moorhead. Arrangements by Korsmo Funeral & Cremation Service, Moorhead, MN.

The family of Robbie S. Ball created this Life Tributes page to make it easy to share your memories.

Send flowers to the Ball family.