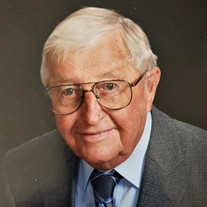 Richard “Dick” W. Arnseth , age 97, Moorhead, MN, died February 16, 2021, at Eventide on Eighth, in Moorhead. Richard William Arnseth was born February 7, 1924, the son of Julius and Inga (Lee) Arnseth in Fargo, ND. He was baptized, confirmed, and a lifetime member at Pontoppidan Lutheran Church, Fargo. Dick attended school in Fargo and graduated from Fargo Central in 1941. One year later he was drafted by the Army and served in World War II. Dick was deployed to the Philippines and was wounded. He was honorably discharged and received the Purple Heart and Combat Infantry Badge. Upon returning to Fargo, he worked as a Brakeman/Conductor for the BNSF railroad for 41years. On May 17, 1952 he was united in marriage to Helen Hellem of Northwood, ND, at Pontoppidan Lutheran Church. They lived in Moorhead their entire lives while raising four children, Rick, Lee Ann, Shirley and Lori. After retiring, he and Helen spent 20 winters in Arizona where he enjoyed the many activities offered at the resort. Dick found a new interest in wood crafts and golf, adding to a long list of other hobbies including fishing and beekeeping. He was a member of the Sons of Norway Kringen Lodge 4-25, in Fargo, and the Moorhead American Legion Post 21. He was preceded in death by his parents; and a brother, Norman Arnseth; a sister, Helen Arnseth Torvik, died April 29, 2021. He is survived by his wife; four children and their spouses; six grandchildren; four great-grandchildren. Memorials preferred to Pontoppidan Lutheran Church or the charity of your choice. A Life Celebration service for Dick will be Friday, June 4, 2021, at 11 AM, in Pontoppidan Lutheran Church, Fargo. Burial, with full military honors, will be in Moorhead Memorial Gardens. We anticipate the service for Dick will be recorded and the recorded version will be uploaded for future viewing.

The family of Richard W. Arnseth created this Life Tributes page to make it easy to share your memories.

Send flowers to the Arnseth family.