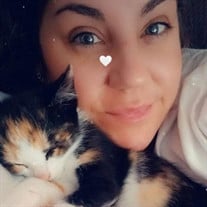 Rachael Joy Blue was born November 10, 1988, in Fargo, ND, to Robert “Bobby” and Wendy (Rupprecht) Blue. She was baptized and confirmed at Our Savior’s Lutheran Church in Moorhead, MN. She was raised in Moorhead. She loved volleyball and swimming. Rachael chose swimming and lettered in 8th grade. She was a huge asset to her team. She graduated from Moorhead High School in 2007. Rachael went to St. Thomas University right after high school. She completed two years there. She decided to try something different and ventured to Tampa, FL. While there, she attended Hillsborough Community College, was a nanny to several families, and met many interesting people who became good friends. When she returned home, she attended MNSTC and completed the LPN program. Rachael worked at various jobs, starting at age fifteen as a lifeguard, a waitress, and a nanny. She worked as a CNA and an LPN at Sanford Health. She later worked at American Crystal Sugar. Rachael was very artistic and creative. She made cards, keychains, shadow boxes, and her writing was beautiful. She loved her kitties, Jax and Lucy, her friends and most of all, her family. Rachael died Tuesday, October 26, 2021, of natural causes, in her Fargo home. Rachael is survived by her mom, Wendy, Moorhead; niece, Quinn Blue, Moorhead; nephew, Leo Swanson, Moorhead; niece, Nevaeh Swanson, Dilworth, MN; aunts, Judy Jones, Goodridge, MN, Joan (Larry) Doeden, Moorhead, Candi Rupprecht, Fargo, Norma McLean, Fargo, and Barb Flateland, Fosston, MN; uncles, Norman (Laurie) Olson, Glyndon, MN, Richard (Melanie) Olson, Dilworth, Duane (Angie) Olson, Fargo, and Doug (Wanda) Olson, Moorhead; many cousins and a host of friends. She was preceded in death by her dad, Robert “Bobby,” in July of 2021; and brother Jason, in August of 2018. Rachael struggled these last few months after her dad’s death. This beautiful, loving girl is now free of her struggles. “Rest in peace, my loving daughter.” There will be a Celebration of Rachael’s life Saturday, November 6, 2021, at 11 AM, in Our Savior’s Lutheran Church, Moorhead. Visitation will be one hour before the service.

Rachael Joy Blue was born November 10, 1988, in Fargo, ND, to Robert &#8220;Bobby&#8221; and Wendy (Rupprecht) Blue. She was baptized and confirmed at Our Savior&#8217;s Lutheran Church in Moorhead, MN. She was raised in Moorhead. She loved... View Obituary & Service Information

The family of Rachael Joy Blue created this Life Tributes page to make it easy to share your memories.

Send flowers to the Blue family.