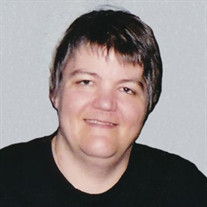 To join Peggy's Family for her service please click the following link: https://portal.midweststreams.com/services/watch/0hHyNYVu5O Peggy F. Anderson, 66, of Moorhead, MN, died Monday, November 1, 2021, in Eventide on Eighth, Moorhead. Peggy Fae Anderson was born June 24, 1955, in Fargo, ND, to Myrle and Cleora Anderson. Living her entire life in Moorhead, she graduated from Moorhead Senior High School and later attended Moorhead State University, studying business and accounting. Peggy enjoyed a lifelong love of music and played several instruments. She was a very creative person and had many artistic abilities. She owned Hemp and Bead on 1st Avenue North in Fargo where she could use her creative abilities making jewelry. Peggy suffered a traumatic brain injury in 2002 and since then she has lived in a REM Northstar home in Moorhead and recently moved to Eventide in Moorhead. The family wishes to sincerely thank the staff and caregivers of REM house and Eventide. Peggy is survived by her mother, Cleora Anderson; and brothers, David (Linda) Anderson, Paul (Kathy) Anderson and Tom (Gyda) Anderson; as well as several nieces and nephews. She was preceded in death by her father Myrle Anderson; sister, Carole Bauer; as well as paternal and maternal grandparents. Peggy's Family will Celebrate Her Life on Friday, November 5, 2021, at 2:00 PM, in Korsmo Funeral Chapel, Moorhead, MN. Burial will be in the Riverside Mausoleum, Fargo, ND. For those who will not be able to join her family for her Life Celebration there will be a link to the Livestream on her obituary page. (Korsmo Funeral and Cremation Service, Moorhead, MN)

The family of Peggy F. Anderson created this Life Tributes page to make it easy to share your memories.

To join Peggy&#39;s Family for her service please click the following...