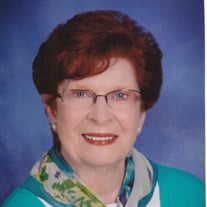 On Monday, May 11, 2020, the angels came for a beautiful soul who was our mother, grandmother, sister, and friend. Patricia A. (Collier) Gilbertson passed away peacefully at home under the care of Ethos Hospice and her long term caregiver, at eighty-seven years of age. Patricia was born in Paris, IL, on August 29, 1932, to Clara and Chester (Garwood) Collier. She spoke fondly of many memories as a child, especially of her maternal grandmother Garwood, and their farm she would often visit. In high school she would save her money to take a long bus ride and pay for voice lessons – the beginning of a long and successful vocal career. After graduating high school, she worked for a while, however, music remained a driving force in her life. She started singing on radio shows and joined the Philanthropic Educational Organization (P.E.O.) sisterhood, something she treasured the rest of her days. She met and married Bill Garland, his career first taking them to Pennsylvania then in 1958 to the University of Minnesota, Moorhead, MN, where he was the wrestling coach and a professor. Song continued to be a motivator as she thrived in the Fargo-Moorhead classical music scene. She sang in her church, often doing solos, and was the choir director for a time. She delighted numerous congregants with her beautiful voice during her employ as a cantor at the Temple Beth El in Fargo. Patricia helped found the Fargo-Moorhead Master Chorale, and was instrumental in establishing the Fargo-Moorhead Opera Company in 1968, soliciting great vocalists from England and Australia to be part of the first Opera Company productions. Patricia’s fantastic soprano voice was perfect for her many leading roles in several operas, to include Carmen, Hansel and Gretel, and The Merry Widow. Her love of music imparted a desire to help others hone their craft, leading her to teach vocal lessons to numerous protégés in her Moorhead home. Patricia was married in 1985 to Duane “Rick” Gilbertson, a member of the Happy Hooligans. Shortly thereafter Rick went on active duty and they moved to Alexandria, VA. She continued her music career, singing as often as possible in her church and performing recitals. Living in the nation’s capital was wonderful for her with all the cultural events – she enjoyed attending the Kennedy Center, National Cathedral, Washington National Opera, and many others. When Rick retired from the Air Force they moved to New Bern, NC. Patricia continued to sing and teach voice, surrounded by the beauty of the North Carolina woods while making life-long friends. After Rick’s passing, Patricia returned to Fargo in 2002, where her children reside, becoming re-acquainted with many friends and creating new ones. She enjoyed music, traveling, movies, fine dining, reading, and much more. Patricia is survived by her children, Lisa (Garland) Kittelson (Brad), Scott Garland (Erica), and David Garland (Laurel); her brother, Tom (Carol) Collier; sister, Jane Ashley; nine grandchildren and five great-grandchildren. She was a wonderful mother, great cook, and a talented musician. Often her family was told “what a beautiful voice your mother has” - this was indeed a fact! Patricia will have a private family memorial service at First Presbyterian Church, Fargo, on June 6, 2020. She will be interred at Riverside Cemetery, Fargo.

On Monday, May 11, 2020, the angels came for a beautiful soul who was our mother, grandmother, sister, and friend. Patricia A. (Collier) Gilbertson passed away peacefully at home under the care of Ethos Hospice and her long term caregiver,... View Obituary & Service Information

The family of Patricia Gilbertson created this Life Tributes page to make it easy to share your memories.

Send flowers to the Gilbertson family.