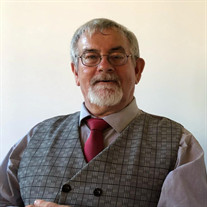 To view the service for Ove, please follow this link: https://portal.memoryshare.com/memoryshare/videoplayer/ove-hatlevoll-8121791 Ove Jan Hatlevoll, 66, died Thursday December 23, 2021, at his home in Moorhead, Minnesota. Ove was born on November 26, 1955, in Stavanger Norway to Bjarne and Hanna (Aasland) Hatlevoll. As an infant they immigrated to Canada. They lived in Edmonton Alberta, until the family moved to Cooperstown, North Dakota, in 1971. Ove graduated from Cooperstown High School in 1974 and joined the US Army right after graduation. He served in the Army for six years working in the military police canine unit. After the army Ove went to NDSCS in Wahpeton for auto mechanics. He worked as a mechanic in Fargo, ND, for a few years before moving to Rogers, Arkansas. Ove returned to Moorhead in 2011, where he worked at Habitat for Humanity Restore. Ove is survived by his daughter, Julie Hatlevoll, St. Petersburg Florida; siblings, Richard (Shellee) Hatlevoll, Fargo, Mark Steven (Lori) Hatlevoll, Moorhead, and Elizabeth Walvatne, Fergus Falls, MN; nephew, Aaron (Kara) Hatlevoll, Oklahoma City; and niece, Casey Hatlevoll, Fargo. Ove was preceded in death by his father, Bjarne Hatlevoll; and his stepfather and mother, Elwin and Hanna Walvatne. Visitation for Ove will begin at 10 AM, with a Life Celebration Service at 11 AM, Tuesday, January 4, 2022, in Korsmo Funeral Chapel, Moorhead. Burial will take place in Fargo National Cemetery.

The family of Ove Jan Hatlevoll created this Life Tributes page to make it easy to share your memories.

To view the service for Ove, please follow this link:
https://portal.memoryshare.com/memoryshare/videoplayer/ove-hatlevoll-8121791

Send flowers to the Hatlevoll family.