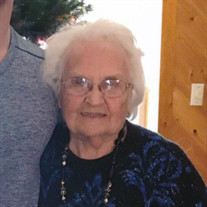 In the “Celebration of Life”, we the family, gather together, for Myrtle Violet (Loock) Pender. She met with her Angels in her home on June 13, 2020, at the age of 92 years. Myrtle passed quietly in her home in the caring loving hands of her children, Raymond Pender III, Carolyn Savageau and Sharon Schultz. Myrtle was born on May 1, 1928, to Jesse Gilbert Loock and Hilda Elise (Waller) Loock in Parshall, ND. She was the oldest surviving sibling to Florence (Loock) Schenck, Vernon Loock, Raymond Loock, and LeRoy Loock. On May 12, 1946, Myrtle was united in marriage to Raymond James Pender II and resided in Downer, MN. They had five children: Mary Ann, Bonnie Jean, Carolyn Marie, Raymond James III, and Sharon Kimberly. Upon the death of her husband, Raymond Pender III, Myrtle made the decision to move to Moorhead, MN in 1967. Having a 9th grade education, she completed her high school education and continued on to nursing school, achieving her LPN license. Myrtle began her career in 1970 at St. Ansgar Hospital in Moorhead and in 1973, after a back injury, she went to work in the office of Dr. John Gjevre, Internal Medicine Specialist until her retirement. Dr. John and his wife, Marge, remained friends. She met her closest companion and friend, John Stash, in 1973. They enjoyed their time together until his death in 2010. She had two best friends, Marlene Mickelson and Lucy Wolfgram, and many good neighbors and additional friends, including James Traun, who was like a son, always taking care of Myrtle and making sure she was doing well. He was always assured Myrtle would have something (food) made up for him, including her baked bread and doughboys. Myrtle’s greatest “joy” was her children. She possessed a love like no other. Being a survivor of cancer, she had a strong faith. Myrtle had a deep respect and appreciation of others. She had a diligent work ethic and fed everyone whether they were hungry or not and continued this days before her death, even though her health prevented her from eating food herself. She took great pride in her baked bread. She enjoyed fishing, travelling, going to the casino “anytime”, “anywhere” but only that one machine. She also enjoyed crocheting and playing card games of Whist, and the never ending games of Rummy. When she was 90 years old, Myrtle made a gift for her children that will forever be cherished and loved. Myrtle is survived by her five children; Mary Ann (Dennis) Ernst, Bonnie Jean Blue, Carolyn Marie Savageau (Dave Grinde), Raymond James III (Teri) Pender, and Sharon Kimberly Schultz. In addition, she is survived by 16 grandchildren, 21 great-grandchildren and five great-great-grandchildren. Myrtle was Loved, Cherished and Respected and we will miss her dearly. She was preceded in death by her parents; husband, Raymond James Pender II; and siblings, Florence Schenck, Vernon Loock, Raymond Loock and LeRoy Loock. One grandson, Shawn Savageau; two sons-in-law, Steven Schultz and Steve Savageau; one daughter-in-law, Kimberly Pender; one sister-in-law; Alice Loock, and special friend, John Stasch. A private Celebration of Life will be held on Thursday, June 18, 2020, in Korsmo Funeral Chapel, Moorhead, MN. Interment will be held in Elmwood Cemetery, Sabin, MN. Arrangements by Korsmo Funeral Service, Moorhead, MN.

In the &#8220;Celebration of Life&#8221;, we the family, gather together, for Myrtle Violet (Loock) Pender. She met with her Angels in her home on June 13, 2020, at the age of 92 years. Myrtle passed quietly in her home in the caring loving... View Obituary & Service Information

The family of Myrtle V. Pender created this Life Tributes page to make it easy to share your memories.

In the “Celebration of Life”, we the family, gather together,...

Send flowers to the Pender family.