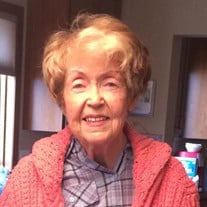 Not sure what to send?

Joan “Joni” Ruth Wraalstad, 86, of Fargo, ND, formerly of Moorhead, MN, passed away on Monday, December 27, 2021, in her home under the care of Ethos Hospice. Joan Ruth Anderson was born on April 7, 1935, to Sigurd and Nora (Bjerke) Anderson, in Forman, ND. Joni was raised and graduated from high school in Lisbon, ND. She then attended Hamline University, St. Paul, MN, where she received a bachelor’s degree in Speech and English. After graduation, Joni relocated to Connecticut where she worked as a social worker. When she returned to North Dakota, she taught at several different small-town schools. She was teaching in Courtenay, ND, when she met Eugene (Gener) Wraalstad. On September 1, 1961, Joan and Eugene were married in Trinity Lutheran Church, in Lisbon. In 1966 the two moved to Moorhead, where Joni lived until 2007. Together, Gener and Joni raised three children: Kimber, Cory and Randal. After her children were older, she worked at a variety of other jobs including Dayton’s Department Store, RGIS Inventory and for the US Census Bureau. She met and maintained many long-term friendships from these experiences. Joni liked interacting with people and enjoyed spirited conversations and long debates on many topics. She enjoyed flowers and plants. She planted any container with flowers including the children’s wagon. Her patios were always full of colorful flowers and vegetables. She enjoyed spending time outdoors as long as the weather was warm and the sun was out. Other interests of Joni’s included reading; attending the theater, symphony, opera; quilting; and politics. However, those who remotely knew Joni recognized her greatest passion was elephants as she had an extensive collection of elephants, including collectibles, artwork, furniture, books, jewelry and clothing. Every Christmas, her favorite time of the year, you could count on a seeing a Christmas tree covered in elephant ornaments. She also enjoyed living elephants and contributed routinely to the Sheldrick Wildlife Foundation that rescues orphaned baby elephants. Joni was a member of the Order of Eastern Star and active in the Republican Party assisting with local political campaigns. She enjoyed spoiling her grandchildren and spending time with her many family members and friends. After a long and valiant fight against multiple myeloma, living for 17 years among the elite 10% who survived greater than 10 years, Joni ultimately succumbed to her health issues. Joni was preceded in death by her husband, Eugene; parents, Sigurd and Nora; sisters Bette Pigott, Marianne Blanchard, Delores Grulkowski, Carolyn Dance; and brother Sydney Anderson. She is survived her three children, Kimber Wraalstad, Cory (Krista) and Randal (Stacey); and her grandchildren, Sarah Wraalstad and Hunter Wraalstad. Joni’s memorial service will be held on Friday, January 28, 2022, at 11 AM in Olivet Lutheran Church, Fargo, with a visitation one hour prior to the service. After the service there will be an open house until 7:00 PM, address to be posted closer to the service. Burial will be in Oakwood Cemetery, Lisbon in the spring. In lieu of flowers, memorials can be given to the Sheldrick Wildlife Trust (www.sheldrickwildlifetrust.org) and Shiners Hospitals for Children (www.lovetotherescue.org). Memories and condolences may be shared at www.korsmofuneralservice.com Arrangements by Korsmo Funeral and Cremation Service, Moorhead, MN.

The family of Joan "Joni" R. Wraalstad created this Life Tributes page to make it easy to share your memories.