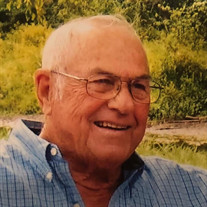 Howard John Rensvold, 86, of Fargo, ND, passed away peacefully at his winter residence in Mesa, AZ, on December 8, 2020. Howard was born on July 31, 1934, in rural Cass County to Arthur O. and Cora E. (Sundstad) Rensvold. He attended elementary school at Noble 108 in Cass County and graduated from Hendrum High School, Hendrum, MN. He attended Interstate Business College in Fargo, and honorably served in the US Army as an Artillery Sgt. stationed in Germany. Howard began his work career in the farm equipment business in 1952 with Massey Harris Company as a warehouseman. He later became a Salesman for Cass County Implement Co., the local Massey Ferguson dealer in Fargo. Following his service in the US Army, in 1959, he joined Fargo Implement Co., a John Deere Company store as a retail salesman and began a career with John Deere lasting over 33 years. He held a variety of marketing responsibilities at Rochester, MN, Williston, ND, Syracuse, NY, Columbus, OH, East Moline, IL, and Waterloo, IA. At the time of his retirement, he held the position of Director, Service at Deere & Co., at the corporate headquarters in Moline. On August 5, 1956, he married Darlene Kyllo of Hunter, ND, at Stordahl Lutheran Church, Galesburg, ND. For the past many years, Howard and Darlene have enjoyed their retirement spending the winters in Mesa, where they were very active in their community. They were charter members of the Sunland Village East Golf Club. Howard spent much of the summers in Fargo as a team leader with Aggasiz Habitat for Humanity building houses. He was also a member of the Red River Senior Golf Tour and an avid follower of the Fargo Moorhead Redhawks baseball team and the NDSU Bison football team as well. In addition to his wife, Darlene, he is survived by three children, Ken Rensvold of Kissimmee, FL, Joni (Jeff) Dotseth of Coralville, IA, and Dale Rensvold of Lenexa, KS; four grandchildren, Ryan (Erika) Rensvold of Minneapolis, MN, Beth (Jeff) Knight of Phoenix, AZ, Joel Dotseth of Des Moines, IA, and Erik Dotseth of New Zealand; a sister, Eileen (Chuck) Leasure of St. Petersburg, FL; a great-granddaughter, Olivia; a great-grandson, Milo; and many cousins, nieces and nephews. He was preceded in death by his parents, Art and Cora Rensvold; brothers, Alden and David; and sister, Carol. Services will be held at a later date to be determined with burial at Nora Lutheran Cemetery, Gardner, ND. Arrangements by Korsmo Funeral and Cremation Service, Moorhead, MN.

The family of Howard J. Rensvold created this Life Tributes page to make it easy to share your memories.

Send flowers to the Rensvold family.