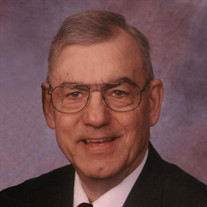 Gene Francis Lenzmeier departed this world and entered Heaven on February 14, 2021. Gene was born June 8, 1931 in Breckenridge, MN, to Frank and Marjorie (Miller) Lenzmeier. In high school he met the love of his life, Marilyn Claire Wellan, when her family moved to Wahpeton, ND. They were married there on June 10, 1951 and later moved to Moorhead, MN, where they raised their seven children. Gene was an honest, diligent, and hard-working man, able to accomplish anything he chose to do. Compassionate and generous, he was always willing to lend a hand to anyone who needed assistance. Together, Gene and Marilyn instilled their faith and values in their children by their example, and Gene was always ready with stories to teach valuable lessons. They both enjoyed camping, fishing and traveling, and their children benefited greatly from these adventures. Gene loved to sing and spent several years with Marilyn as part of the Fargo Depot Singers. They loved entertaining and bringing joy to people. Even in the last months before he passed, he sang songs and blew kisses to his children via Zoom. Gene was deeply loved and will be greatly missed. Gene was welcomed into Heaven by his parents, his loving wife Marilyn, and two of his sisters, Judith Lenzmeier Howard and Melanie Lenzmeier Oberg. He is survived by his children Pamela Jean Laughing Waters (Jim Lendway), Paul Alan Lenzmeier (Susann), Peggy Ann “Annie” Bergquist (Bill), Thomas Patrick Lenzmeier (Suzanne), Kevin John Lenzmeier (Jody), Gene Walter (Larisa) Lenzmeier, and Stefne Rae Lenzmeier Broz (Mathew); eleven grandchildren, ten great grandchildren, and many nieces and nephews. Gene is also survived by five sisters and one brother. Gene was deeply devoted to, and lovingly cared for, his wife throughout her battle with Alzheimer’s; memorial tributes may be made in his name to the Alzheimer’s Association (www.alz.org). The family wishes to extend a special thank you to the staff of the Fergus Falls Minnesota Veterans Home for their loving care of Gene during his time there, as well as LB Hospice. Arrangements by Korsmo Funeral Service, Moorhead, MN. A private family service will be held at a later date.

The family of Gene Francis Lenzmeier created this Life Tributes page to make it easy to share your memories.

Send flowers to the Lenzmeier family.