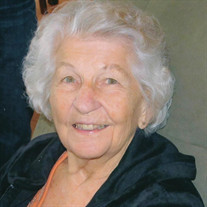 To view the recording of Florence's memorial mass click the following link: https://portal.midweststreams.com/services/iframe/20502 Florence Clara (Puhalla) Matson, 95, Fargo, ND, passed away on February 9, 2021, in Rosewood on Broadway, Fargo. Florence, formerly from Felton , MN, was born on June 6, 1925, in Staples, MN, to John and Anna Puhalla. The family later moved to Boruff farm, Blanchard, ND, then to the Blanchard Bonanza farm. Florence and siblings worked hard on the farm. She would tell stories how she helped her father find their way in snowstorms because they couldn’t see, as she knew the way because of playing with her eyes shut, running from building to building. Florence later moved to Felton with her family. She went to school there until she left home at the age of 16 to go to California during WWII to weld B17 and B27 airplanes. When she returned to Felton, she married Ernest Matson, on December 23, 1946, in Ada, MN. They made their home in Felton, where they raised their 4 children. Florence was a very kind and thoughtful person and a very hard worker doing numerous jobs, from working in potato fields to a cook in Felton School until it closed, all the while taking care of things at home. She enjoyed sewing, crocheting, reading, and was known for her popcorn balls at Halloween, where kids from all ages came to get. After Ernest’s death on January 27, 1995, she continued to live in Felton until August of 1998, when she moved to Parkview Terrace, Moorhead, MN, where she lived for 17 years. After which she moved to Eventide Fairmont Assistant Living, Moorhead. She loved collecting swans and hunted all over for them while living in Moorhead. She also enjoyed making the Puhalla Family tree book (originally Puchalla, that she spent hours on. Florence lived in Fairmont up to the last month, where she was at Rosewood on Broadway. Florence dearly loved her children, grandchildren, and great-grandchildren. She always enjoyed all the family get togethers and could see how proud she was of all of them. She especially loved the hugs! Florence is survived by her children, Dennis (Cheryl) Matson, with children, Dawn (Troy) Bonenberger and children, Jordan and Brendan; Trevor (Jill) Matson with child, Abbie; Holly (Carl) Spaeth; Dean (Laurie) Matson with children, Beau (Tonya) Matson and children, Dakota, Cole, Gage; Mindy (John) Sackrider and child, Sadie; Shaylee (Kyle) Tomes; Shayne Thomas; Lacey Perez and child, Andrew; Tiffany (Adam) Boyd and children, Caden, Rylan, Jaelynn; Danny (Kaye) Matson with children, Judd Matson, Andrea (Darby) Plath, and children, Lauren, Graham, and Braydin; Alissa (Jason) Groos and children, Grayson and Collins; Kim (Marvin) Przepiora with child, Charity (Brent) Przepiora/Hagen. Florence was preceeded in death by her parents, John and Anna; husband, Ernest; siblings, Francis, Nicklus, Louis, Matilda, Roselyn, Carolyn, Bernadine, Valerie; twin infant brothers, and infant grandson. A special thank you to Fairmont, Ethos Hospice and Rosewood for all the care they gave Florence. Florence's funeral mass will be held Friday, June 4, 2021, at 11 AM, in St. Joseph Catholic Church, Moorhead, MN. Her burial will be in Felton Cemetery, Felton, MN. Arrangements by Korsmo Funeral and Cremation Service, Moorhead, MN.

The family of Florence C. Matson created this Life Tributes page to make it easy to share your memories.

To view the recording of Florence&#39;s memorial mass click the following...

Send flowers to the Matson family.