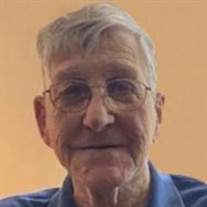 Donald “Don” DeJong Donald DeJong, 97, of Frazee, MN, passed away peacefully on May 12, 2020, in Bethany on University in Fargo, ND. Donald was born April 10, 1923, in Prinsberg, MN. A long time resident of Moorhead, MN, Donald worked at the West Fargo (ND) stockyards from the 1960s until retirement, doing business as McNulty Cattle Company and DeJong Cattle Company. Don was very proud of his service to his country while in the Army during World War II. There he participated in the liberation of Europe. Highly decorated, he was awarded two Purple Hearts for wounds suffered during the fighting in Europe. A devoted family man, he delighted in spending time with his children and grandchildren, frequently playing host for the family at his lake cabin. He enjoyed many activities including fishing, hunting, bowling and umpiring softball games. Donald was an accomplished woodworker and enjoyed making things for his friends and family. He particularly enjoyed making items of religious significance, and nearly met his goal of giving away 1,000 crosses to whomever he crossed paths with. A long term member of First Presbyterian Church of Moorhead, Don held numerous volunteer roles over the years, and could be counted on as a dependable assistant for any job that needed to be done. He had an unfailing ability to put the needs of others before himself. He was known for his sense of humor and overall positive nature. His love, kindness, compassion and outgoing personality will be missed by all, but never forgotten. He was preceded in death by his parents, Dick and Jeltje DeJong; sister, Nellie Hoekstra; and brothers, Eli, Andrew, Cornie, John, Richard, and Harry DeJong. He is survived by his wife of 73 years, Marion DeJong; children, Donald K. DeJong, Moorhead, Lynn Diane Olson, Frazee, MN, Mary Jeanne Skarnes, Maple Grove, MN, Cheryl Rae Brendemuhl, Gainesville, FL, and Douglas James DeJong Vancouver, WA. He is also survived by thirteen grandchildren and nineteen great-grandchildren. (Not an outlaw in the bunch). A celebration of Don’s life will be held on Friday, August 7, 2020, at 11 AM in First Presbyterian Church, Moorhead. Burial will be at Sunset Memorial Gardens, Fargo, ND. Memorials preferred to First Presbyterian Church of Moorhead. Arrangements by Korsmo Funeral Service, Moorhead, MN.

The family of Donald DeJong created this Life Tributes page to make it easy to share your memories.

Send flowers to the DeJong family.