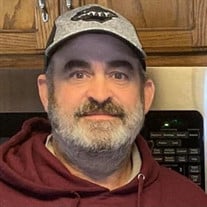 Daniel Maurice Savat was born February 15, 1966, in Moorhead, MN. He was the son of Etienne and Grace (Anderson) Savat. Dan grew up in Moorhead, attended Moorhead Senior High School, and graduated from Moorhead State University where he majored in computer science. Dan is survived by his mother, Grace Savat; sisters, Julie Savat (John Burkel), and Jodi Savat (Robert Bucklin); nieces and nephews, Christopher Etienne Bucklin (Emma Nelson), Kailey Marie Bucklin (Jesse Ramos), Mackenzie Margaret Bucklin (Weston Adair), and Nicholas Daniel Bucklin (Ella Paul.) Dan worked his entire career with Blue Cross Blue Shield Noridian. He was the Director of IT Architecture. Dan was known for his humor, wit, and one-liners. He had many work friends and lake friends. His greatest joy was spending time with his family, particularly his nieces and nephews. He always made them his priority and was always there for them. Dan spent all his summer weekends at the lake, where he loved to fish, joke with the neighbors and help all the kids learn how to fish. At the lake he was known as “Uncle Dan” to all the kids, young and old; they all loved him like he was their family. Dan was also known as the “Grill Master” and everyone at the lake benefited from his skills. His presence will be missed by everyone who knew him. He was a generous, fun-loving soul, and never had a negative thing to say about anyone. Dan passed away in his home on April 11, 2021. The same day his father passed away 32 years ago. There will be a gathering of friends Friday, April 16, 2021, from 5 – 7 PM, in Korsmo Funeral Chapel, Moorhead.

Daniel Maurice Savat was born February 15, 1966, in Moorhead, MN. He was the son of Etienne and Grace (Anderson) Savat. Dan grew up in Moorhead, attended Moorhead Senior High School, and graduated from Moorhead State University where he majored... View Obituary & Service Information

The family of Daniel M. Savat created this Life Tributes page to make it easy to share your memories.

Send flowers to the Savat family.