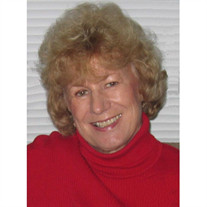 Beverly J. Ingersoll, 87, of Moorhead, MN, died Sunday, August 2, 2020, in Eventide on Eighth, Moorhead. Beverly Jean Miller was born February 23, 1933, the daughter of Andrew and Anna (Benson) Miller, in Averill, MN. She was raised in Averill and graduated from Glyndon (MN) High School in 1951. On August 31, 1962, she was united in marriage to Ted Ingersoll in Sisseton, SD. They made their home in Moorhead where Beverly worked for Dawson Insurance Agency for thirty-six years as the office manager. After her retirement, she continued to live in Moorhead and in 2016 became a resident of Eventide on Eighth. Beverly enjoyed golfing, bowling, and old country western music. She is survived by her husband, Ted; children, Vicki (Chuck) Breneman, Moorhead, Julie (Mark) Grossman, and Ted (Andrea) Ingersoll, both of Fargo, ND, and Tim (Michelle) Ingersoll, Kiowa, CO; ten grandchildren and 12 great-grandchildren. She was preceded in death by her parents; daughter, Debbie Stockert; brothers, George Miller, Jim Miller, and Bob Miller; and sister, Janet Polchow. Memorials may be directed to Hospice of the Red River Valley. A Celebration of Beverly’s Life will take place at a later date. (Korsmo Funeral Service, Moorhead, MN)

The family of Beverly J. Ingersoll created this Life Tributes page to make it easy to share your memories.

Send flowers to the Ingersoll family.