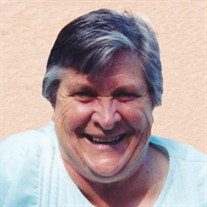 Audrey L. Jeral, 88, Moorhead, MN, passed away Friday, February 28, 2020 at Sanford Medical Center, Fargo, ND. Audrey Laverne Ward was born February 27, 1932 in Fargo, ND to Homer G. and Anna M. (Knutson) Ward. She graduated in 1949 from Fargo Central High School. After school she worked at Woolworth’s and later Newbury’s. In 1959, Audrey married the love of her life, Andrew J. Jeral at Olivet Lutheran Church in Fargo, ND. To this union were two sons, Andrew Jr. and Allen. Audrey provided childcare for over 25 years to several families in the FM area. In 1992, Andy Sr. passed away. In 2003, she happily accepted a position at Arby’s. She cherished the friendships she made there and enjoyed going to work each day. In 2016, Audrey lost her son Andy Jr, “Spooker”. She continued her faith and surrounded herself with family and friends she made over the years, knowing one day, she will be reunited with her husband and sons. During her younger years, Audrey was active in bowling leagues and the VFW Auxiliary. For over 30 years she enjoyed hosting family and friends at Meadow Lake Campground in Detroit Lakes. Audrey had a love for conversation, playing card games, and playing bingo. She was a wonderful cook and enjoyed tending to her garden during the summer. She was the given the nickname “Pickles”, because she often shared her canned produce with friends and family. She loved spending time with her siblings and spent a lot of time with her sisters Marjorie and Helen. In their later years they still bickered back and forth like they did as young girls. She moved to Park View Terrance for the last several years of her life. She throughly enjoyed taking part in their community events and cherished the many friends she made. Audrey loved everything and everyone, especially the Minnesota Vikings and Minnesota Twins. She would spend hours on the phone with her sister in law Jeanette Johnson, talking back and forth about the teams they loved, and about any subject imaginable. Her fun personality and heart of gold will be missed by everyone who knew her. Audrey is survived by her sisters-in-laws, Elsie Jeral and Juanita Jeral and many nieces and nephews. Audie, or Auds, will be deeply missed by The Rosenfeldt’s, whom she treated as a second family. She is preceded in death by her husband, Andrew Jeral Sr. and two sons; Andrew Jr. and Allen, and her siblings; George Ward, Charles Ward, Lloyd Ward, Bernie Glowka, Loretta Haakinson, Myrtis Goral, Helen Christy, and Majorie Houlgum. Audrey’s family requests all to dress casually and wear your favorite sport team outfit in memory of Audrey.

The family of Audrey L. Jeral created this Life Tributes page to make it easy to share your memories.

Send flowers to the Jeral family.