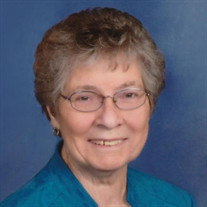 Ann Marie Mertes, 84, of Moorhead, MN, passed away on Thursday, December 16, 2021, in Beehive Assisted Living, Moorhead, under the care of Ethos Hospice. Ann Marie was born on September 17, 1937, on a farm near Baker, MN, to Gerald and Elizabeth (Quiggle) Griffin. She attended grade school at Assumption Catholic School in Barnesville, MN, and graduated from Barnesville High School. After high school she started working at St. Ansgar Hospital as a phone operator. She met Don Mertes and they were married on June 22, 1963, in St. Francis de Sales Catholic Church, Moorhead. Together they lived in Moorhead and had three children, Jeffrey, Lori and Randall. Ann was a stay-at-home mom until her children were in high school, then she worked part time for Moorhead Technical College as a phone switchboard operator, and in the book store. Ann worked many City of Moorhead and general elections as an election judge, volunteered at St. Francis de Sales Church and, when her first grandchild, Jason, was born, she did Grandma daycare for six to seven weeks when Lori returned to work. For 41 years, summers were spent at their cabin on West McDonald Lake, near Dent, MN,when many memories of family gatherings and friendships were made. Family was so very important to Ann and she will be missed by so many; but she is finally at rest and free from the complications of Alzheimer’s, which brought her to the Beehive Homes of Moorhead. She had lived there since August of 2019. Ann is survived by her husband of 58 years, Don; children, Jeffrey, Lori (Jay) Fearing, Randall, all of Moorhead; grandsons, Jason (Casey) Fearing, Fargo. ND, Tyler Fearing, Moorhead; great-grandchildren, Liam and Everett Fearing; sisters, Micky (Jim) Schneider, Moorhead, Mary (Wes) Ewine, Bismarck, ND; many nieces and nephews and their children. She was preceded in death by her parents; brother, Ken Griffin; sister, Audrey Krauth; nephew, Rick Krauth. The Family of Ann would like to thank Mark and Alyce Goldthorpe and all the staff of The Beehive Homes for the care extended to us through this difficult time and to the staff of Ethos Hospice. A Visitation will be held on Tuesday, December 21, 2021, from 5 PM to 7 PM, in St. Francis de Sales, Catholic Church, Moorhead, with a prayer service at 7 PM. Ann’s Mass of Christian Burial will be held on Wednesday, December 22, 2021, at 11 AM in St. Francis de Sales. Burial will be in St. Joseph’s Cemetery, Moorhead. Memories and condolences may be shared on our website at www.korsmofuneralservice.com Arrangements by Korsmo Funeral and Cremation Service, Moorhead, MN.

Ann Marie Mertes, 84, of Moorhead, MN, passed away on Thursday, December 16, 2021, in Beehive Assisted Living, Moorhead, under the care of Ethos Hospice. Ann Marie was born on September 17, 1937, on a farm near Baker, MN, to Gerald and Elizabeth... View Obituary & Service Information

The family of Ann Marie Mertes created this Life Tributes page to make it easy to share your memories.

Send flowers to the Mertes family.