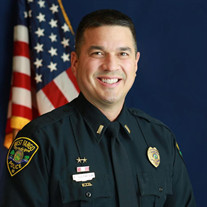 To view the service for Adam, please follow this link. https://livestream.com/NorthviewChurch/events/9687244 Adam Gordon Gustafson was born on December 2, 1980, to Woody Gustafson and Tami Gustafson. Adam grew up in Long Prairie, Minnesota. He graduated high school from Long Prairie - Grey Eagle in 1999, and went on to complete his freshman and sophomore year of college at Minnesota State University-Mankato. Adam joined the Minnesota Army National Guard in 2001, and attended basic training in Fort Benning, Georgia, followed by AIT in Fort Gordon, Georgia. Adam served his country in the Army National Guard for 7 years. Adam was deployed to Baghdad, Iraq, in 2004, for Operation Iraqi Freedom where he met his wife, Amber Scott. They were married on November 12, 2005. Adam obtained a degree in criminal justice from the University of North Dakota in 2008, and went on to complete the Law Enforcement Skills Program in Alexandria, Minnesota, to become a licensed peace officer. Adam was hired by the West Fargo Police Department as a patrol officer in 2009. He proudly served the interests of the citizens of West Fargo. Adam rose through the ranks quickly and was promoted to Lieutenant in 2018. He was honored to be a police officer and was proud to stand beside his fellow officers who have, in life and in death, never left his side. Walter Gordon Gustafson was born to Amber and Adam on September 22, 2009. From that point forward there was no greater joy for Adam than being a dad. Ruby Rebecca Gustafson arrived on April 9, 2011, and Emily Lenore Gustafson completed the family on September 4, 2014. As a sports fanatic, Adam passed his passion for sports onto his children. He golfed with Amber and the kids every Sunday and never missed one of their hockey or ball games. Adam dearly loved his children and there is no doubt they are his greatest legacy. Adam also loved his country and the American flag along with travel, food, fantasy sports, cooking, rare whiskey, his family and friends. Some of Adam’s greatest trips included Alaska, Europe, Belize, Peru, Dominican Republic, and the Masters in Augusta, Georgia, which was one of his lifelong dreams. Adam was easy going, had a great sense of humor, and was quick with a smile. Adam died suddenly on May 18, 2021. He will be remembered as a family man, for his faith, and for being an amazing husband, son, father, brother, uncle, veteran, police officer and friend. Adam is survived by his wife, Amber Gustafson; his children, Walter, Ruby, and Emily Gustafson; his parents, Woody and Marilyn Gustafson, and Tami Gustafson (Jeff); his siblings, Chris (Ann) Gustafson, Eric (Nadia) Gustafson, Molly Smith, Melissa (Josh) Johnson, and Michelle (Jordan) Spychalla; his grandparents, Paul and Sharon Brean, and Leora Hillman; his parents-in-law, Becky and Gale Scott; sisters-in-law, Brooke (Jeremy) Hoefs and Megan (Josh) Hanson; grandmother-in-law, Ethel Graff; 19 nieces and nephews; numerous aunts, uncles, cousins, law enforcement brothers and sisters, fellow military veterans and friends. Adam was preceded in death by his grandparents, Gordon and Kathryn Gustafson, Gene Hillman and grandfather-in-law Harold Graff. A service to celebrate the life and honor the memory of Adam will be Wednesday, May 26, 2021, at 1 PM, in Northview Church, Fargo. The service will be livestreamed, and that link will be placed here before the service.

The family of Adam G. Gustafson created this Life Tributes page to make it easy to share your memories.

To view the service for Adam, please follow this link.
https://livestream.com/NorthviewChurch/events/9687244

Send flowers to the Gustafson family.