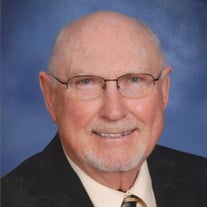 William E. DesSaint, 88, Moorhead, MN, died Sunday, November 15, 2020, at Sanford Medical Center, Fargo, ND following a three-year courageous battle with cancer. William Edward DesSaint, known to many as Bill, was born May 30, 1932, in Minneapolis, MN, to George and Nettie (Anderson) DesSaint. He graduated from Roosevelt High School in Minneapolis and for a short time, attended college at the University of Minnesota. Bill shared stories with his family on growing up near Minnehaha Park and riding the streetcar to work. As a young man, he spent his summers working at his uncle’s farm near Middle River, MN. Bill proudly served his country as a reconnaissance sergeant/forward observer with the United States Army during the Korean Conflict. Following his honorable discharge, Bill started employment with International Harvester, working the parts counter. On January 10, 1959, he was united in marriage to Gladys Midboe in St. Paul, MN. As Bill continued working for International Harvester, truck division, he moved into management, living in several communities throughout the years. In 1975, they established their home in Moorhead. With his love for sports, Bill was active with his three sons’ sporting activities. He coached, mentored, and encouraged them, instilling lifelong lessons of working hard and being part of a team atmosphere. He was a Moorhead Spuds, Concordia Cobbers, and Minnesota Gophers fan, and like most of us, a disappointed Vikings fan, but his loyalties remained true through the years. Bill retired at the age of 55 and started a new “career” of volunteering and enjoying life. He and Gladys were long-time members of Lutheran Church of the Good Shepherd in Moorhead. Bill was proud to be associated with the ministry group at church, “Helping Hands.” People were important to him and volunteering his time and talents allowed him to give back in so many ways. He was a member of Moorhead Kiwanis Club and volunteered at the Clay County Veterans Services Office. Bill was extremely happy to be part of the Veterans Honor Flight to Washington D.C., sharing the true spirit of patriotism with his fellow comrades. During the winter months, Bill and Gladys traveled south, making many new friends over the years. He enjoyed woodworking, completing many household projects for Gladys and extended family. One of Bill’s projects was a speedboat he constructed. Not only did it float, but it was extremely fast! He shared many enjoyments such as golfing, fishing, biking, daily walks, camping with his family, and time at the lake. However, the highlight of his life was spending time with his grandchildren and watching them grow into young adults which made him an extremely proud grandpa! Bill will be remembered by his three sons, Tom (Patti), Maple Grove, MN; Steve (Kelly), Grand Rapids, MI, Dan, Moorhead, MN; his four grandchildren, Ashley (Alex), Tyler, Carly (Jacob), and Jordan; and his sister, Jeanne (Jerry) Boutelle. He is welcomed to his eternal home by his parents (George and Nettie); his wife, Gladys; his sister, Marliss; and his daughter-in-law, Christi DesSaint. A Private Family Service will be held. A livestream of William’s service will be Friday, November 20, 2020, beginning at 2pm by following the link: https://portal.midweststreams.com/services/watch/0aOp8Rr8u or by visiting the Lutheran Church of The Good Shepherd’s website at www.knowthegoodshepherd.org/privateevents. The family requests that any memorials be sent to Lutheran Church of the Good Shepard, Helping Hands Ministry.

The family of William E. DesSaint created this Life Tributes page to make it easy to share your memories.

Send flowers to the DesSaint family.