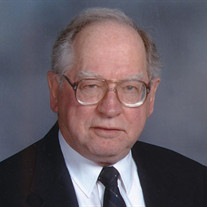 Wilbert R. Fischer, 88, of Fargo, ND, passed away at home on Friday, November 15, 2019, under the care of his family and of Hospice of the Red River Valley. Wilbert Roy Fischer was born near Ashley, ND, to Jacob J. and Margaret Fischer, on December 17, 1930. He was raised on a farm, where he walked several miles to country school. He graduated from Ashley High School in 1949. He attended summer school at Ellendale Normal Industrial College the summers of 1949 and 1950 and taught two school years in a one-room schoolhouse. In October of 1951, Wilbert entered the US Army and served two years stateside in the signal corps as a teletype operator, until his discharge in 1953. Upon returning home, he finished his four-year degree at Ellendale Normal. He then taught high school in Tyndal, SD, and at Lake Bronson and Hancock, in Minnesota. Wilbert finished his Master’s degree in business in 1959, at UND in Grand Forks, ND. He taught business courses at Fargo Central High School and in Willmar (MN) Vocational School. He completed his Doctorate Degree in business in 1972, at UND, and taught accounting at MSUM, Moorhead, MN, for 24 years, until retiring in 1993. Wilbert held a CPA certificate, and at one time a realtor’s license. He was a tax preparer for over 50 years and volunteered for SCORE, was a board member of Valley Senior Services, as well as serving in numerous church offices. On September 26, 1959, Wilbert married Betty Olson, in Mentor, MN. They just reached the 60-year milestone. Wilbert had many interests which included helping at church, gardening, taxes, tinkering in the garage where he could fix anything. He loved to sing, singing in quartets and choirs. He spent hours reading his Bible. We think he was the most kind, loving, hard-working, Godly person we can think of. Dad, now you can eat all the popcorn, sunflowers seeds and ice cream you want! Dad often said, “Do what is right, no matter if anyone is watching or not.” Survivors are his wife, Betty; daughters, Gail (Barry) Olson, MN, and Jane (Steve) Cybulski, MT; a son, Keith; grandchildren, Derek (Cheryl) Olson, Jenna (Ross) Pearson, Shekina DeTienne, Haley (Jakob) Baumeister, Blaise DeTienne, Connor (Erin) Olson, and Isaiah (Ashlin) DeTienne; great-grandchildren, MiKyla, Kyson, Brynlee and Addyson, and two little boys, due in December, Ezra and Grayson; and a sister, Eloise Kelle. He was preceded in death by his parents and three siblings, Norma, Alma and Orvil. The funeral service for Wilbert Fischer will be Saturday, November 23, 2019, at 10:30 AM, in Bethel Evangelical Free Church, Fargo. Visitation will be one hour prior to the funeral, at the church. Burial will be in Riverside Cemetery, Fargo. Funeral arrangements by Korsmo Funeral Service, Moorhead. (Korsmo Funeral Service, Moorhead, MN)

Wilbert R. Fischer, 88, of Fargo, ND, passed away at home on Friday, November 15, 2019, under the care of his family and of Hospice of the Red River Valley. Wilbert Roy Fischer was born near Ashley, ND, to Jacob J. and Margaret Fischer, on... View Obituary & Service Information

The family of Wilbert R. Fischer created this Life Tributes page to make it easy to share your memories.

Send flowers to the Fischer family.