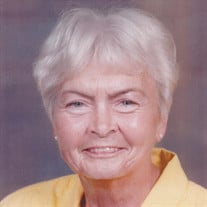 Uldine J. Bagne, 91, Moorhead, MN, died Tuesday, December 24, 2019 at Eventide on 8th in Moorhead. Memorial Service for Uldine will be held Tuesday, January 7, 2020 at 2:30pm in Bottolfson Chapel at Eventide, Moorhead. Uldine Jean Horeni was born February 17, 1928 in Berwyn, IL to James and Hildegard (Dvorak) Horeni. She was raised and educated in Berwyn graduating in 1946 from Berwyn High. She attended North Park College in Chicago, IL receiving a Liberal Arts degree. She then took training at Cook County Hospital in Chicago to work as a Lab Technician. On November 23, 1949, Uldine was united in marriage to Dean Bagne in Brookfield, IL. They lived in the communities of Erskine, MN, Alexandria, MN and made Moorhead their home since 1966. Uldine and Dean fostered several children throughout the years. Uldine was a wonderful homemaker and a fantastic grandmother. Interior decorating was one of her passions. She assisted Dean with the family business, Bagco Manufacturing, by keeping the books and making sure all was running smoothly. During her later years, she enjoyed spending time at the lake, getting together with family and playing Bridge. Uldine will be remembered and missed by her one son, Craig (Diane) Bagne of Moorhead, one daughter, Alexis Paxton, of Fargo, ND, three grandchildren; Shawn (Craig Ellingson) Bagne, Troy (Angela) Bagne and Charles Paxton, five great-grandchildren; Sophia, Ella, Clara, William ad Nora and one sister, Hilde Howden. She is preceded in death by her parents, her husband Dean (2009) and one brother, Wesley Horeni.

The family of Uldine J. Bagne created this Life Tributes page to make it easy to share your memories.

Send flowers to the Bagne family.