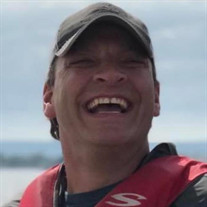 Sterling P. Kuntz, 44, Moorhead, MN, died unexpectedly, Friday, July 3, 2020 in his home. Sterling, known to many as “Sterlz”, was born August 1, 1975, in Grand Forks, ND, to Larry and Amy (Schall) Kuntz. In 1978, the family moved to Moorhead. Sterling graduated from Moorhead High School in 1993 and went on to attend college at NDSCS and completed his degree in graphic arts. Following college, he lived for a short time in Arizona before returning home to Moorhead. On October 18, 2002, Sterling married his true love, Jessica Olson, at St. Joseph Catholic Church, Moorhead. He started his working career for Richman’s Printing & Knights Printing in Fargo and later for CMC in West Fargo, ND, as an estimator and purchasing agent. Currently he was employed by SunOpta Sunflower in Moorhead as the Bird Seed Sales Manager. Anyone who met Sterling can easily describe his big smile, easy-going demeanor, and of course his booming voice and thunderous laugh (especially if he had a Coors light in his hand). Beyond his charismatic nature, Sterling’s gifts to the world ran much deeper. Sterling accepted people for who they were and was happy, faithful, loving, and supportive. He brought joy wherever he went and could fill others with it. People just felt better after being around him. These traits and many others would be seen in his life full of family and friends, church, hockey, soccer, baseball, broomball, and many late night bonfires at the lake. He enjoyed traveling too, and memorable trips were made to Amsterdam with friends, venturing to New York and Jamaica with Jessica. In 2010, Sterling and his sister Melissa, traveled to New Orleans and enjoyed a fun-filled weekend of southern comfort and the Super Bowl XLIV (a football fanatics dream). With Jessica, Connor, and Carson they took family trips to the Black Hills in South Dakota, Yellowstone National Park, Duluth and Minneapolis MN. He enjoyed broomball league and always looked forward to the Moorhead Alumni Hockey Tournament. Each Fall, he made sure his fantasy football team was ready and he avidly followed the Minnesota Vikings and Wild. “Sporty” (as his dad used to call him) and his father had a remarkable resemblance and shared many interests, including sports making several trips on party buses to take in games. He always looked forward to his mom bringing a birthday cake to celebrate his birthday, a celebration they shared for 44 years. To say Sterling was involved and loved life is an understatement, but his greatest love of all was his family. Sterling went above and beyond everything he did, but when it came to his family, there was no limit. He coached his children in hockey and baseball for years, and when soccer came into the picture, he not only taught himself the rules, he became the coach. Spare time was spent at the lake with family during the summer months, pulling his kids on the tube for countless hours on end, fishing with his family, and laughing with anyone around him. His family will remember the quiet comfort he would give during the still moments. His peace, love, and spirit could be felt during those times and will be deeply missed. Sterling was a devoted husband, father, son, and friend. His zest for life and contagious laugh will be missed by everyone. He is survived by his wife Jessica and their two sons, Connor and Carson; his parents, Larry and Amy Kuntz of Moorhead; his sister, Melissa Kuntz (Greg Rohde) of Duluth, MN. He is also survived by his godmother, Bernice Wickenheiser of Moorhead, MN. He was preceded in death by his grandparents Victor and Sally Schall and Jacob and Christine Kuntz If you are unable to attend services for Sterling, but want to send a card, please mail to Korsmo Funeral Service at 409 8th St. S, Moorhead, MN 56560 and we will deliver to the family. PRAYER SERVICE VIDEO: to view the recorded Prayer Service for Sterling, please follow this link, thank you. https://youtu.be/DNrwkrvxvLo

The family of Sterling P. Kuntz created this Life Tributes page to make it easy to share your memories.

Send flowers to the Kuntz family.