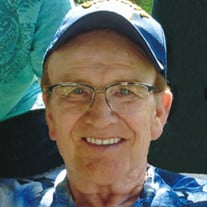 Maranatha Church will be hosting a livestream of Sigurd's service. Follow this link to view: https://youtu.be/sNxKJRfrW-k On November 9, 2020, Sigurd Allen Sivertson passed away peacefully at home in Moorhead, MN, with and under the loving care of Hospice of the Red River Valley. He is now with his heavenly father after battling pancreatic cancer for the past few years. Sigurd was born on the 19th of September 1942, to Sigurd and Ann (Klevgaard) Sivertson in St. Ansgar Hospital, Moorhead. He was raised in faith at Jevnaker Church. He was a graduate of Felton (MN) High School in 1960, where he was active in the Letterman’s Club, FFA, and the annual staff. After graduation, Sigurd joined the US Navy, and was stationed at Fallon, Nevada, and Adak, Alaska. He served three years in active duty and three years in the reserve. Upon completion of his military career, Sigurd attended Interstate Business College in Fargo, ND, and also worked at Bud’s Roller Rink, Moorhead, where he met a beautiful gal, Glennys Erickson. They were joined in marriage on September 19, 1964, at Elim Lutheran Church, Fargo, and they celebrated over 56 years together, as God intended. Sigurd enjoyed a very successful career with Kinney’s Shoes, which took the family to many places as his career developed. His accomplishments and awards with Kinney’s are far too many to list but include many big trips and sales awards. Sigurd is survived by his wife, Glennys; three children, Sig Jr. and his wife, Pam Sivertson, Sue and her husband, Jason Koehler, and Steve, and his wife, Lan Sivertson; eleven grandkids; four great-grandkids; three brothers; five sisters; and one brother-in-law. He was preceded in death by his parents; a sister, Lois Ozmun; and two nephews. The Sivertson family would like to thank everyone for sharing in the celebration of Sigurd’s acceptance into Heaven, where he waits for other believers in Christ Jesus to join him. In lieu of flowers, the family would like memorials sent to Gideons International, Farm in the Dell of the Red River Valley, and Hospice of the Red River Valley. Sigurd enjoyed many of life’s treasures, which included singing with church and family, activity with Farm in the Dell, and playing cards, sometimes all night long. A visitation for Sigurd will be held on Sunday, November 15, 2020, from 5 PM until 7 PM, with an evening service at 7 PM, in Maranatha Free Lutheran Church, Glyndon, MN. His funeral service will be Monday, November 16, 2020, at 10:30 AM, also in Maranatha Church in Glyndon. He will be buried in the Felton Cemetery. Arrangements by Korsmo Funeral Service, Moorhead, MN. For all public services, Covid-19 precautions should be observed, including wearing a face mask, and maintaining social distancing.

Maranatha Church will be hosting a livestream of Sigurd's service. Follow this link to view: https://youtu.be/sNxKJRfrW-k On November 9, 2020, Sigurd Allen Sivertson passed away peacefully at home in Moorhead, MN, with and under the loving... View Obituary & Service Information

The family of Sigurd A. Sivertson created this Life Tributes page to make it easy to share your memories.

Maranatha Church will be hosting a livestream of Sigurd&#39;s service....

Send flowers to the Sivertson family.