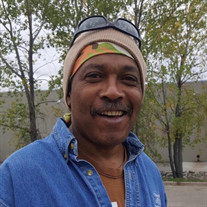 Ronnie Richardson, of Moorhead, MN, passed away due to heart complications on Wednesday, December 23, 2020, at the age of 61, in Sanford Health West Campus, Fargo, ND. He was born on August 18, 1959, in Gary, IN, the son of Helen and Edward Richardson. Ronnie graduated from Roosevelt High School in 1978, and held several different jobs, one of the first was working in a steel mill in Gary. He had an acute sense of humor, always finding a joke to crack that was sure to bring a smile to anyone around him. He had a sharp wit, and never failed to offer his advice towards any situation. He was earnest and practical, but knew how to have fun too. Though he was a distinctly private person, those who were close to him knew he cared deeply for them, and he made sure to let them know with a phone call, card, or letter whenever distance kept him away. He prayed for his family just as they did for him, too. His collection of movies rivaled that of a Blockbuster video store, and he enjoyed spending time with his son watching a flick or two with a bowl of popcorn, which he claimed to be an essential. He was handy in the kitchen and loved to cook. A pencil in his hand was a great tool, as he also was a very talented artist. Ronnie had an interest in the Bible and believed the many promises that Jehovah holds out to mankind. He is survived by his mother, Helen Richardson of Waterford, MI; brother, Warren and sister-in-law, Earline Dixon of Pontiac, MI; sister, Eva Seay of West Palm Beach, FL; son, Caleb; daughter, Tia; and a host of nieces and nephews. He was preceded by his brother, Edward Richardson; and his father, Edward. A Funeral Service for Ronnie will be Wednesday, December 30, 2020, at 2:00 PM in Korsmo Funeral Chapel, Moorhead. Burial will take place in Evergreen Memorial Cemetery, Moorhead. (Korsmo Funeral Service, Moorhead, MN)

Ronnie Richardson, of Moorhead, MN, passed away due to heart complications on Wednesday, December 23, 2020, at the age of 61, in Sanford Health West Campus, Fargo, ND. He was born on August 18, 1959, in Gary, IN, the son of Helen and Edward... View Obituary & Service Information

The family of Ronnie Richardson created this Life Tributes page to make it easy to share your memories.

Ronnie Richardson, of Moorhead, MN, passed away due to heart...

Send flowers to the Richardson family.