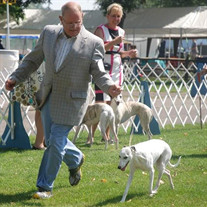 Roger Allen Fremo, 80, of Moorhead, MN, passed away on Wednesday, January 15, 2020, in Eventide on 8th in Moorhead. Roger A. Fremo, was born July 22, 1939, in Clarkfield, MN, to Albin and Lillian (Philipson) Fremo. Roger was born a farm boy and got a job at the Clarkfield Creamery where he learned how to operate boilers. He earned his engineers license and started work at Minnesota State University of Moorhead in 1956, where he worked until his retirement. In 1960, Roger was united in marriage to Shirley Johnson, in Milan, MN. They later made their home in Moorhead, where together they raised four children. Roger and Shirley were married for 51 years before Shirley passed away in 2011. Roger had many interests and liked to keep busy with work, projects and hobbies. He liked to travel and see new things, and to go for drives to the lakes. Roger loved to go fishing and camping. He also loved dogs and spent 35 years training, showing and teaching training classes. He has helped thousands of dogs to become good companions. Roger was a great handy man and could fix most anything. He usually had a project or two going. If something seemed impossible, he would figure out how to do it by coming up with some innovative solution. Roger found a companion in Carol Jacobs who brought him happiness to his life in recent years. Roger was everyone’s friend and loved by many. He will be dearly missed. Roger is survived by his three daughters; Shannon Fremo, Cynthia (David) Johnson, and Michelle Johnson; five grandchildren, Shane (Michele) Shepard, Dustin Shepard, Dana Shepard, Zachary Johnson, and Sarah (Jade) Frenzen; three great-grandchildren Caleb Shepherd, Merideth Frenzen, and Annabelle Frenzen; significant other, Carol Jacobs; and brother, David Fremo. He was preceded in death by his parents; wife, Shirley; son, Sidney; brother, Gerald Fremo; and an infant sister. A Visitation for Roger will take place on Tuesday, January 21, 2020, from 5 PM to 7 PM, with a prayer service at 6:30 PM in Korsmo Funeral Chapel, Moorhead. His Funeral Service will be Wednesday, January 22, 2020, at 11 AM, in Trinity Lutheran Church, Moorhead. Burial at Riverside Cemetery, Moorhead.

Roger Allen Fremo, 80, of Moorhead, MN, passed away on Wednesday, January 15, 2020, in Eventide on 8th in Moorhead. Roger A. Fremo, was born July 22, 1939, in Clarkfield, MN, to Albin and Lillian (Philipson) Fremo. Roger was born a farm boy... View Obituary & Service Information

The family of Roger A. Fremo created this Life Tributes page to make it easy to share your memories.

Roger Allen Fremo, 80, of Moorhead, MN, passed away on Wednesday,...

Send flowers to the Fremo family.