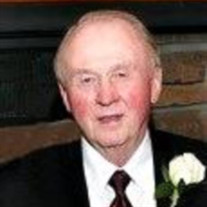 Rodger Thomas Campbell was born June 22, 1931, in Breckenridge, MN, to Thomas and Mabel (Lobeck) Campbell. Rodger was raised in Breckenridge where he graduated from high school in 1949. While in high school, Rodger excelled in all sports. He attended NDSSS for a time and then entered the United States Air Force in 1951. He served the majority of his time in Germany and was honorably discharged in 1955. Following his military service, Rodger returned to the Breckenridge area. Rodger married Lorraine Buus on May 25, 1963, in Wahpeton, ND. They made their home in Breckenridge until moving to Moorhead, MN, in 1971. He worked for forty-four years as a brakeman and conductor for the Burlington Northern Santa Fe Railway. Rodger loved the outdoors and learned to hunt and fish with his father at an early age. Following his passion for the outdoors, Rodger and Lorraine purchased their first cabin on Otter Tail Lake in 1966, where he and his family enjoyed fishing, gardening, playing golf and cabin improvement projects. In later years, they moved to Heilberger Lake. Rodger died Sunday, October 11, 2020, in Rosewood on Broadway, Fargo, ND, at eighty-nine years of age. He is survived by his wife, Lorraine, Moorhead; son, Tom (Pam) Campbell, Port Orchard, WA; daughter, Linda (Kevin) Goodno, St. Paul, MN; three grandchildren, Sara, Abby and Katie Goodno; and a sister, Dolores Simdorn, Fergus Falls, MN. Visitation for Rodger will begin at 11 AM, with a funeral at 1 PM, Friday, October 16, 2020, in Korsmo Funeral Chapel, Moorhead. Burial will take place in Riverside Cemetery, Breckenridge. In keeping with current CDC guidelines, masks and social distancing will be required. Rodger’s funeral will be livestreamed from his obituary page on the Korsmo website for those unable to attend. Memorials are preferred to Hospice of the Red River Valley. To view Rodger's funeral on Friday, follow this link: https://portal.midweststreams.com/services/watch/UcWmO6RSRO

Rodger Thomas Campbell was born June 22, 1931, in Breckenridge, MN, to Thomas and Mabel (Lobeck) Campbell. Rodger was raised in Breckenridge where he graduated from high school in 1949. While in high school, Rodger excelled in all sports.... View Obituary & Service Information

The family of Rodger Campbell created this Life Tributes page to make it easy to share your memories.

Send flowers to the Campbell family.