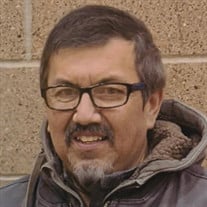 Roberto Lopez, 54, Dilworth, MN, died Tuesday, June 9, 2020 in Sanford Hospice House, Fargo, ND. Roberto was born June 2, 1966 in Laredo, TX to Ingnacio and Sidronia (Chavez) Lopez. He grew up and attended school in Laredo. On May 18, 1985, Roberto was united in marriage to Leticia Garcia in Laredo. Roberto made the decision to move to Minnesota in 1986. Little did he know, this move was the biggest and most important decision he had ever made. Roberto will always be remembered for his wonderful sense of humor, and his willingness to help anyone in need. Most importantly, was his love for his family. He enjoyed being outside playing with his grandchildren and entertaining family as he grilled their favorite meal. Roberto instilled in his children a love for family, friends, and hard work. A quote from his children, “We appreciated all the time our father gave us, the hard work our father did to make us all better people.” Roberto will be remembered and forever missed by his wife, Leticia Lopez; three sons, Roberto Jr (Ashley) Lopez, Nathan (Kali) Lopez, and Joseph Lopez; three grandchildren, Estavan, Aurora, and Maci. In addition, he is survived by his mother, Sidronia Lopez, his father, Ingnacio Lopez; two sisters, Margie (Mike) Hernandez, Lulu (David) Martinez and one brother, Ingnacio Lopez Jr. He was preceded in death by his two brothers.

The family of Roberto Lopez created this Life Tributes page to make it easy to share your memories.

Send flowers to the Lopez family.