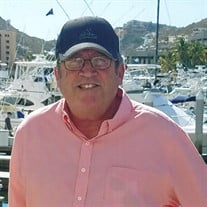 Robert Dean Famias, beloved husband, father, grandfather and brother died on October 17, 2021, at the age of 68. Bob was born January 28, 1953, to Dean and Elaine Famias in Aberdeen, SD where he spent his first 10 years growing up. In 1963 the family moved to Moorhead, MN where Bob finished his education in the St. Joseph Catholic School System and Moorhead School System culminating with his graduation from Moorhead High School in 1971. He then attended Moorhead State University for two years. While growing up in Moorhead, Bob started to develop a life-long passion as a sportsman as he started to hone his hunting and fishing skills. Family outings were centered on driving around Minnesota on scouting trips that he directed, until he finally learned how to drive. Bob started his work career with Clay County where he was responsible for identifying and removing abandoned vehicles. While on one of his daily routes he met the first love of his life, a raven black haired beauty named Samantha (Sam). Bob had found his perfect hunting partner. However, his mother was not too fond of his choice and Bob along with his younger sister, Peggy, were forced to keep Sam out of sight. Bob then went to work for the BNSF Railway for a short period until he finally found his calling with the United States Postal Service. What started out as a part-time seasonal job turned into a 34 year career. It was also a time when Bob found his next true love and ultimately his life-long partner. Bob and Darlene Froehlich of Jamestown, ND, were married on August 8, 1975. Within a few years Bob and Darlene added their daughter, Jenny, and son, Brian, to the family and he now had an additional passion as being a loving and doting dad. He passed onto his children the same fervor for hunting and fishing and the entire family spent much of their time on the lakes or at campgrounds throughout the state. He also added the title of Sports Dad to his resume and became an avid supporter of Shanley Women’s Basketball and Moorhead Hockey. Bob retired from the postal service in 2008 and was not content just to idle away in his free time. What once had been just a hobby soon became another devotion that he tackled with fervor. He and Darlene were often seen during the summer months with clubs in hand forcing small white orbs to return to their holes on golf courses throughout the area. Bob and Darlene also joined the ranks of Do-It-Yourselfers. His passion and love of hunting and fishing culminated in the building and decorating of his own private compound in the Lake of the Woods area. Many outings with family and friends have been shared in this piece of paradise that Bob and his family have created. Time moves on, children grow to adulthood and find their soulmate and start their own families. The end result: Grandkids. Bob had now found something new to “Light His Fire.” Hunting, fishing, and golf stories were still available, but talking and sharing stories about his grandchildren now topped the chart. He was so proud to talk about his grandchildren, Grace and Jack and newly arrived Myles. Bob left us too soon. He may not be with us again in person, but his memory will go on. Those who were fortunate to share time with him will always recall a fond memory as they walk the fields hunting for pheasant or sit quietly on a chilly fall day in the high grass of a slough waiting for the perfect Mallard to soar by. The memory may come again while reeling in that trophy Walleye on a spring day or sitting in an icehouse on a Minnesota February day dipping for Northern Pike. Maybe it will be on the day you accomplish an achievement that Bob once had as he nailed a hole in one. Today is a sad day for all those who called Bob: Husband, Dad, Grandpa, Brother, Cousin, Uncle, colleague, or friend. Tomorrow and in the years to come though, when we have that memory of Bob, a smile will come and we’ll all be the better for having shared some time with him. He is survived by Darlene, his wife of 46 years; daughter Jenny (Johann) Toikka of Ramsey, MN; son Brian (Bre) of Roseau, MN; grandchildren, Grace, Jack, and Myles; and sister, Peggy (Bob) Bayless of Kansas City, KS. A visitation will be held for Bob, on Sunday, October 24, from 5 PM - 6 PM with a prayer service at 6 PM, in Korsmo Funeral Chapel, Moorhead. A Memorial Mass will be held on Monday, October 25, 2021, at 11 AM, in St. Joseph Catholic Church, Moorhead. Burial will be in St. Joseph's Cemetery, Moorhead. Arrangements by Korsmo Funeral and Cremation Service, Moorhead, MN.

Robert Dean Famias, beloved husband, father, grandfather and brother died on October 17, 2021, at the age of 68. Bob was born January 28, 1953, to Dean and Elaine Famias in Aberdeen, SD where he spent his first 10 years growing up. In 1963... View Obituary & Service Information

The family of Robert "Bob" Dean Famias created this Life Tributes page to make it easy to share your memories.

Send flowers to the Famias family.