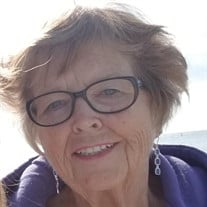 To Join Rita's Family and Friends for her Life Celebration Service please click the following link: https://portal.memoryshare.com/memoryshare/videoplayer/rita-dickelman-8121599 Rita LaRue Dickelman, age 71, of Moorhead, MN, died December 12, 2021, in Sanford Hospice House Fargo, ND, of complications due to cancer. Rita was born July 1, 1950, in Moorhead, MN. She graduated from Barnesville High School and later attended Moorhead State College and graduated from Ritters Beauty School in St. Paul, MN. She married Richard Dickelman in 1979 and they settled in Moorhead. Rita owned and operated Rita’s Moorhead Beauty School (which later became Ingenue Beauty School) until her retirement in 2010. Rita enjoyed spending time in Florida on Sanibel Island. She first started traveling to Sanibel with her mom Lois and sister Colleen and later began traveling there with her husband Richard. She loved the ocean and collecting shells from the beach. She was a collector of items that highlighted her colorful personality, such as fun and unique hats, Betty Boop figurines, and crafting supplies. Rita also loved spending time with family and friends at Lake Seven. Her passion for crafting shined through as she often had fun activities for her grandkids and great nieces and nephews to do at the lake. Rita is survived by her husband, Richard; sons, Ryan (Kayla) and Rustin (Crystal); six grandchildren, Mikael, Madelyn, Makynli, Kelby, Kullyn, Kordel; sister, Colleen (Ken); brothers, Larry (Cara) and Lance (Peggy); and many nieces and nephews. Rita was preceded in death by her parents, Merlyn and Lois Akers; and granddaughter, Karsyn Dickelman. A Gathering of Family and Friends will begin at 9:30 AM, Saturday, December 18, 2021, in the Trinity Lutheran Church Christian Life Center, Moorhead, followed by a Celebration of her Life at 10:30 AM. (Korsmo Funeral and Cremation Service, Moorhead, MN)

The family of Rita L. Dickelman created this Life Tributes page to make it easy to share your memories.

To Join Rita&#39;s Family and Friends for her Life Celebration Service...

Send flowers to the Dickelman family.