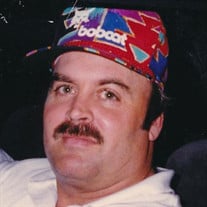 Richard C. “Rick” Evanson, 62, of Wahpeton, ND, passed away Thursday, August 20, 2020, in St. Francis Medical Center, Breckenridge, MN. Richard Carl Evanson was born April 8, 1958, in Fargo, ND, the son of Richard D. and Karen (Arnseth) Evanson. He was raised in Moorhead where he attended school and played hockey for the Moorhead Spuds. In 1976, he graduated from Moorhead High School and then enlisted in the Minnesota National Guard. Rick spent his career as a an over-the-road truck driver working for Three Rivers Trucking, Brand Trucking and DTL. He traveled to the east coast weekly until his retirement in late 2019. He enjoyed spending time with his friends, riding motorcycle and watching hockey with his cat, Chief. Rick will be remembered for his generous heart and love for dogs and especially, cats. His greatest joy was being “Uncle Rick” to Treyten and Avanah. He will be remembered as “Evy”, “Trucker Rick” and “Chief Big Wind” as he was known to share his advice and opinions freely. Rick is survived by his mother, Karen Evanson, Moorhead; sister, Vicki Hanson, Moorhead; brother, Mark Evanson, Moorhead; his cat, Chief; aunts, uncles and many cousins. He was preceded in death by his father, Richard; his grandparents; and brother-in-law, Robert Hanson. In lieu of flowers, memorials may be directed to Cat’s Cradle. A Private Service for Rick will be in Lutheran Church of the Good Shepherd, Moorhead, MN. The service will be live streamed on the Korsmo Funeral Service website beginning at 2:00 PM, Friday, August 28, 2020. Burial will take place in Riverside Cemetery, Moorhead following the Private Service. Current CDC guidelines will be followed during the Private Service and Graveside as social distancing and masks will be required. To view the live stream of Rick's Service please go to: www.knowthegoodshepherd.org/privateevents (Korsmo Funeral Service, Moorhead, MN)

The family of Richard C. Evanson created this Life Tributes page to make it easy to share your memories.

Send flowers to the Evanson family.