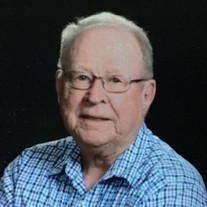 To view the recording of Ray's memorial service, click the following link: https://portal.midweststreams.com/services/iframe/19057 Ray M. Flint, 81, Dilworth, MN, died Thursday, April 15, 2021, in Bethany on University, Fargo, ND. Ray Martin Flint was born September 25, 1939, in Elbow Lake, MN, to George and Clarice (Johnson) Flint. He grew up in the Elbow Lake area, graduating from Elbow Lake High School in 1957. After high school he enlisted in the United States Army and proudly served his country until his honorable discharge in September of 1958. When Ray returned home, he enrolled in the College of Agriculture at NDSU where he earned a degree in agricultural economics. During his studies, Ray interned at Production Credit Association (PCA) in Moorhead, MN, and then was hired upon graduation. On November 25, 1966, Ray was united in marriage to Barbara Wenner in Salem Lutheran Church in Hitterdal, MN. They moved to Dilworth in 1969. Ray worked his entire career for PCA/Farm Credit Services, holding a variety of positions from account manager to CEO. Ray was an active member of Dilworth Lutheran Church, where he took the opportunity to serve the congregation as vice president, chairman of building/grounds committee, and church treasurer. He had been an active member of Dilworth Lions Club for many years. Ray enjoyed serving the community and would do anything for anyone. Pinochle card club with friends was a favorite activity that he and Barb enjoyed for 40 years. Ray retired from PCA/Farm Credit Services in the early 2000’s. During his retirement, Ray and Barb enjoyed trips to Alaska, Canada, Colorado, Utah, Texas and the east coast to see the fall colors. He also took up woodworking, specifically making birdhouses which he would give away. He also bought a boat (to pair with the motor he kept in his trunk) and spent many days fishing on various lakes throughout western Minnesota. Ray loved anything to do with the outdoors, from hunting pheasants, ducks and deer with his sons and grandsons, to fishing for crappies anytime he could. “Quality was better than quantity” was Ray’s favorite saying during fishing trips as cleaning fish was not really one of his favorite things to do. He also enjoyed spending time at Long Lake near Underwood (because there are 150 Long Lakes in MN, you know), his yearly garden, the neighborhood firepit, grilling, pinochle with friends and grandkids, frying fish for family gatherings and a warm Busch Light while visiting and telling stories. Ray attended as many school football, basketball, softball, and baseball games as he could. He truly loved watching his kids and grandkids participate in sports. He was an avid MN Twins, Vikings, NDSU football and MSUM women’s basketball fan. Family was everything to Ray, even during his last days, as his grandchildren visited and spent time with him, their presence brought him a smile and his love was evident. His family was his proudest accomplishment in life and meant the world to him. Ray’s family will always remember the sacrifices he made to make sure his family had what they needed, but most importantly, they will miss his love for family, his sense of humor and infectious laugh, and never-ending advice. Ray is survived by his wife of 54 years, Barbara of Dilworth; his daughter, Becky (Scott) Flint-Payne of Dilworth; three sons, Randy (Keri) Flint of Andover, MN; Ryan Flint (Nelly De La Cruz) of Denver, CO and Robb (Laura) Flint of Frazee, MN; six grandchildren, Gunnar and McKenna Payne, Aiden and Chase Flint, and Vayda and Rowan Flint; sister, Louise (Don) Wickoren; sister-in-law, Shirley Wenner; along with nieces and nephew. He was preceded in death by his parents; sister, Joyce Tommerdahl; three brothers-in-law, Dewey Tommerdahl, Leland Wenner and Lyle Wenner. A gathering of friends and family will be held Monday, April 19, 2021, from 5pm-7pm in Korsmo Funeral Chapel, Moorhead. Due to COVID-19 restrictions, a private memorial service will be held April 20, 2021. Ray’s Family wishes to give a special thank you to Hospice of the Red River Valley and Bethany Retirement Living Center for the loving care they provided for Ray. A livestream link for Tuesday's memorial service will be available here on Ray's obituary page. (Korsmo Funeral and Cremation Service, Moorhead, MN)

The family of Ray M. Flint created this Life Tributes page to make it easy to share your memories.

To view the recording of Ray&#39;s memorial service, click the following...

Send flowers to the Flint family.