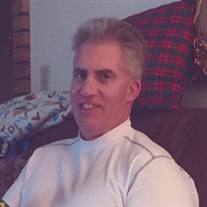 Randy James Larson, 52, Moorhead, MN, died Tuesday, February 16, 2021, in Sanford Hospice House, Fargo, ND, following a short battle with a rare form of melanoma. Randy was diagnosed January 18, (his parents’ birthday) and passed 29 days later. He is survived by his parents, Richard and Sharon Larson of Moorhead; brother, Lance Larson of Ham Lake, MN, five nieces and nephews, Cole, Grace Quinn, Grant, and Griffin; in addition, he is survived by four uncles, three aunts, and six cousins. Randy was employed by Mid-America Steel of Fargo. He loved his job, the people he worked with and the open road. He loved the sound of the big diesel engine and 18 wheels rolling down the highway. Driving an 18-wheeler was his dream since he was young. He attended school in Jamestown, ND, through the 10th grade, then moved to Moorhead where he was enrolled in Moorhead High School, graduating in 1988. After graduation, he went on to truck driving school where he obtained his CDL. During his trucking career, he drove for many different companies throughout Fargo/Moorhead. In Randy’s spare time, he loved working out at the gym. He was very dedicated and passionate about his workout schedule, rarely missing a day. Even on long workdays, Randy found the energy to complete his workout. Randy spent most of his time in the Ottertail Lake area, where he loved golfing with his Dad, nephew, brother, cousins, uncle and friends at Balmoral Golf Course in Ottertail. Joking, laughing with friends and family, cherishing each and every moment spent with them at his camper on Rush Lake are memories he never forgot. Swimming and riding his supercharged jet ski at 70mph, skipping across the water on Ottertail, Rush and Big Pine Lakes. Bonfires with his niece and nephews at Golden Eagle Campground, watching movies, playing corn hole or anything else little people dream up, always brought a smile to Randy. He was an extremely avid Minnesota Vikings fan, even amid all the continued disappointments. Randy’s pride and joy was his 2009 390hp HEMI Stone White Ram Crew Cab 1500. He loved the sound and rumble of the big hemi engine, matting the throttle, unleashing those 390 horses, watching cars disappear in the rearview mirror. Rarely did you see his pickup dirty or unwashed. Most importantly, Randy was a kind and gentle soul. He never had a bad word to say about anyone and was always willing to lend a hand. He was preceded in death by one nephew, Walker William Larson; grandparents, Gordon and Winona McDonald and Lawrence and Wubena Larson; and uncle “Doug”. Arrangements by Korsmo Funeral & Cremation Service, Moorhead, MN Online condolences may be shared at: www.korsmofuneralservice.com

The family of Randy J. Larson created this Life Tributes page to make it easy to share your memories.