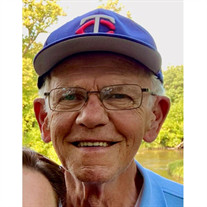 To view Paul Jore's funeral service, Friday, February 5 at 1:00PM, please follow the link below: https://portal.midweststreams.com/services/watch/603O230342 Paul Edward Jore, 72, Dilworth, MN, left this world on Monday, January 18, 2021, in Sanford Medical Center-West Campus, Fargo, ND. Paul was born May 25, 1948, to Henry and Edna (Ostgarden) Jore in Fosston, MN. He moved with his family to several Minnesota areas ending in Fargo, where he attended and graduated from Fargo Central/Fargo North High School in 1966. He then went on to attend Moorhead State University and North Dakota State University to further his education. Employment brought him to Minneapolis, MN, for a time. He then owned Paul’s Plumbing and Heating in McIntosh, MN, for two years before moving back to the Fargo area where he worked in the home improvement retail environment, liking the time he spent at Knox Lumber the best of all. He would still meet people who said “I know you from somewhere” and it was most likely from his Knox Lumber time. He ended his career at American Linen in 2012. In retirement, he spent many hours working in his yard and reading. He was proud of being a long time blood service donor and an active member of Our Savior’s Lutheran Church in Moorhead. March 10,1973, was the start of a new chapter in his life when he and Carol Christianson were married at Moe Lutheran Church in Roseau, MN. The biggest blessing in their lives was the birth of daughter, Lisa Marie, also known as “their favorite daughter.” Throughout their life together, he and Carol, traveled to Europe, Alaska, Canada, and throughout the United States and spent many summer vacations at Minnesota lake resorts with family and friends. Paul is survived by wife, Carol; daughter, Lisa Jore (Allan Rife); and very special grandson, Joshua Rife, Shoreview, MN; sisters, Yvonne Card, Moorhead, Claudette (Terry) Erholtz, Moorhead, and Donna Jore, Dilworth; brother/sisters-in-law, Wayne (Meg) Christianson, Roseau, MN, Lana Christianson, Thief River Falls, MN, Wanda (John) Helmowski, Minto, ND; and several nieces, nephews, and special friends. Paul loved all things Minnesota. He enjoyed taking his boat out on Minnesota Lakes to pull water skiers and tubers, as well as to fish. He enjoyed Minnesota ice fishing trips, traveling, and watching Bison games with his life-long high school friends. In 2016, he became a Certified Naturalist by the Minnesota Department of Natural Resources and volunteered on environmental research projects. Paul was a Vikings, Gophers, and Minnesota Twins fan. He proudly displayed his game tickets and Homer Hankey from the 7th Game of the 1987 World Series where he watched the Twins win their first ever World Series. He was always happy to share his memories of this once-in-a-lifetime experience with anyone. Paul will forever be admired by his family and friends for his warm heart and integrity. A Private Celebration of Paul’s Life will be held Friday, February 5, 2021, and livestreamed for the public starting at 1PM. You can view Paul's service by following the link below: https://portal.midweststreams.com/services/watch/603O230342 Memorials given will be directed towards Paul’s love for nature and donated in his memory. Online guestbook at www.korsmofuneralservice.com (Korsmo Funeral and Cremation Service, Moorhead, MN)

The family of Paul E. Jore created this Life Tributes page to make it easy to share your memories.

Send flowers to the Jore family.