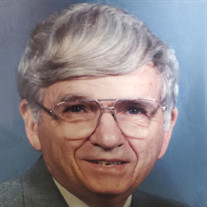 Olin Norens Synstelien, the son of Clarence and Clara (Clauson) Synstelien, was born November 8, 1926, at his parents’ farmhouse in Otter Tail County. Olin grew up speaking Norwegian on a small farm in the Dalton, MN, area. He attended School District #4 Elementary School. In 1942, at the age of 15, Olin left home and traveled by train to Vancouver, WA, where he worked in the shipyard supporting the WWII war effort as a general laborer and then progressed to full journeyman machinist building aircraft carriers. In 1944, Olin entered the Army and served until WWII war ended. He was honorably discharged in 1946. After the war, Olin returned to Moorhead, MN, where he started auto mechanic training. While working at both Northwest Airlines and Allis Chalmers, Olin met Ruth A. Bratland in Fargo, ND. On June 5, 1949, Olin and Ruth were married in Dalton. They lived in Moorhead, until moving to Minot, ND, in 1954 where they purchased their first home in 1959. In 1962, they moved to their second home in Hutchinson, MN. They moved back to Moorhead in 1964 where they raised their family. Olin worked for American Hardware Mutual Insurance selling commercial insurance for several years and then later in the Sears and Roebuck automotive department. As a devoted father, Olin ensured that his children developed both a work ethic and took time to enjoy Minnesota summers, hunting and fishing. After retiring, Olin enjoyed a rich life of great meals, playing cards, visiting casinos with his wife, playing the lotto and visiting grandchildren. Olin touched the hearts of all those he met demonstrating his generosity, selflessness and zest for life in everything he did. Olin died peacefully May 7, 2020, in the VA Community Living Center, Fargo, at the age of 93. He is survived by his sons, Larry (Joan), Chanhassen, MN, and Michael, Moorhead; four grandsons, Alec and Justin both of Las Vegas, NV, and Braden and Garrett, both of Chanhassen; a sister, Ardelle (Rick) Barry; and brothers, Floyd and Ordean (Carol). He was preceded in death by his parents, Clarence and Clara; sister Candora; brothers, Norman, Arthur and Duane; and his loving wife, Ruth Ann. Olin will be buried beside his wife, Ruth, in a private ceremony at Ten Mile Lake Lutheran Cemetery, Dalton. Arrangements are by Korsmo Funeral Service, Moorhead. Online guestbook: www.korsmofuneralservice.com

Olin Norens Synstelien, the son of Clarence and Clara (Clauson) Synstelien, was born November 8, 1926, at his parents&#8217; farmhouse in Otter Tail County. Olin grew up speaking Norwegian on a small farm in the Dalton, MN, area. He attended... View Obituary & Service Information

The family of Olin N. Synstelien created this Life Tributes page to make it easy to share your memories.

Olin Norens Synstelien, the son of Clarence and Clara (Clauson)...

Send flowers to the Synstelien family.