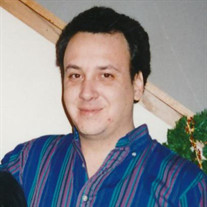 Not sure what to send?

Michael “Mike” John Barry, age 56, of Fargo, ND, passed away surrounded by family on Thursday, December 23, 2021, in Sanford Health-West Campus, Fargo, ND. Mike was born on April 30, 1965, and shortly thereafter was adopted by his wonderful parents, Glenn and Lorraine Barry. Mike grew up in Moorhead, MN, attended St Joseph’s Catholic School through 8th grade and graduated from Moorhead High School in 1983. He married Rebecca “Becky” Ware in 1994. Their love for animals resulted in countless 4-legged babies throughout the years together. Mike worked as a cook for many years at numerous restaurants including Phil Wong’s and The Shack. Mike enjoyed reading, fantasy football, talking old time wrestling, playing chess with his buddies and hanging out at his “Summer Home” with Becky and their dogs. His 40+ year friendship with his best friend, Rick Hermann, resulted in heaps of mischief, many laughs and a lot of great stories. Mike never passed up an opportunity to talk about his beloved New England Patriots, politics, baseball and current events. He had a very kind soul, and we take comfort in knowing that Mike is now pain free in Heaven with his loving parents and many four-legged pets that went before him. Mike is survived by his two best friends, Becky Barry and Rick Herman, both of Fargo, ND; his siblings, Brian (Loree) Barry of Northglenn, CO, Maureen (Brad) Newton of West Fargo, ND and Kathleen (Brett) Shasky of Moorhead, MN; in addition to numerous nieces, nephews, aunts, uncles and cousins. Mike was preceded in death by his parents, Glenn and Lorraine Barry; along with numerous aunts and uncles. A Gathering of Family and Friends will be Friday, January 21, 2022, from 5:00 PM until 7:00 PM, with a Prayer Service at 6:30 PM in Korsmo Funeral Chapel, Moorhead, MN. (Korsmo Funeral and Cremation Service, Moorhead, MN)

The family of Michael Barry created this Life Tributes page to make it easy to share your memories.

Send flowers to the Barry family.