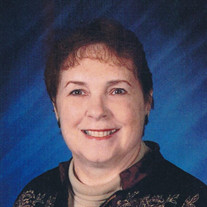 Merle L. McNamara, 74, Moorhead, MN, died Wednesday, April 29, 2020 at Eventide on Eighth in Moorhead. Merle Lee Marshall was born November 20, 1945 at Elgin Air Force Base in Florida. Her family moved to Milwaukee, WI when Merle was an infant. She graduated from Keefe Avenue Grade School in 1960 and Rufus King High School in 1964. After high school, she enrolled in business school, earning her certificate as a keypunch operator. After college, Merle accepted a position as a Keypunch Operator at Brady Manufacturing in Milwaukee. Where her story changes for the rest of her life is when she worked part time for FW Woolworth in South Milwaukee as a waitress. It was here where she met her future husband, Richard McNamara. Richard and Merle’s first date was at a restaurant across the street from FW Woolworth. She always told the story of how she could not pass up a free meal and how he seemed like a decent guy but did not remember his name when he called for the second date. Following a short courtship, Richard and Merle were engaged in St. Paul, MN. On May 21, 1966, they united in marriage at the Presbyterian Church in Milwaukee, and honeymooned on Geneva Lake. The rest is history. They began their lifelong journey together by moving to Hancock, MI. With Richard still fulfilling his obligation with the United States Army, they moved to Fort Monroe, VA where their family started with Teresa. Upon Richard’s honorable discharge, they moved to Eau Claire, WI in the early 1970’s where Christel was born. Later they took their family to West Fargo, ND where Heather arrived to make the family complete. They called West Fargo their home for 20+ years, raising their daughters and making life-long friendships. Merle worked with the West Fargo School District as both a Paraprofessional and Library support for 29 years. It is here her talent as an avid reader arose as she could visually scan as many as 30 new books in just a few days to ensure the school guidelines aligned with the content. Throughout Merle’s life, she was a devoted mother of three daughters. She was an animal lover, trainer, rescuer, and groomer; having many dogs, birds, and rabbits over the years. She was a talented seamstress and enjoyed knitting and crocheting, making coats, dresses, and Halloween costumes for her daughters over the years. She enjoyed bird-hunting, drawing and painting, putting together 5000-piece puzzles, and vegetable and flower gardening. Her painted Christmas decorations will be keepsakes her family will enjoy for years to come. Merle will be remembered and missed by her husband of 53 years, Richard “Mac” McNamara of Moorhead, three daughters: Teresa (Jerry) Worcester, Christel (Jeff) Schmidt, Heather (David) Vinson and four grandchildren, Tyler, Tanner, Quin, and Merritt; sisters Lianne (John) Heyer and Jeri Bonavia; Aunt Yvonne Burg and several nieces and nephews. Preceded in death by her parents: Walter & Audrey (Eckl) Marshall Merle’s Celebration of Life will be held at Oxbow Country Club, Oxbow, ND later this year.

The family of Merle Lee McNamara created this Life Tributes page to make it easy to share your memories.

Send flowers to the McNamara family.