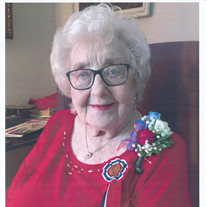 May Eleanor (Berge) Bredeson passed away peacefully Saturday, May 23, 2020 in Eventide on 8th in Moorhead, where she had lived since December 2011, following a stroke. Her death came while she was in the care of the nursing home’s COVID-19 unit and just six days following her one hundredth birthday. May was born to Mathilda and Mathias Berge, both Norwegian immigrants, on 17 May 1920 (Syttende Mai), in Fargo, ND. The family moved to Binford, ND, that year, and two years later they moved to Wheaton, MN. They moved back to Fargo in 1926. The family was active at Olivet Lutheran Church. May attended Fargo public schools and graduated in 1937. Following high school, May worked in downtown Fargo until landing a secretarial position at Northwestern Bell Telephone Company. During World War II, May participated in the USO, writing to many servicemen stationed abroad. One of her correspondents was a former next-door neighbor, Ames Bredeson. After his return from the Pacific Theatre, May Berge married Ames in Fargo in March 1948. They made their home in Breckenridge, MN, for the next 19 years. There, Ames had gone into business with his brother Ellsworth, operating the Bredeson Brothers Gambles store. In 1967, the family relocated to Moorhead. Ames had taken a position in sales with Rott-Keller Supply. May worked at Concordia College as campus information. They were active at Lutheran Church of the Good Shepherd, where she was still a member at the time of her death. Both May and Ames retired in early 1981. They enjoyed travel and the company of friends for much of the next 12 years. May was preceded in death by her parents and her husband, Ames (died April 15, 1993). She is survived by her daughter, Barbara Yergens (Milton) of Fargo; son James of Eden Prairie, Minnesota; her grandchildren, Molly Yergens, Sao Paulo, Brazil, Luis Bredeson, Miami, FL, Joseph Bredeson, Atlanta, GA, nine great-grandchildren and two great-great-grandchildren. May’s family is grateful to the many individuals at Eventide who saw to her needs with care and kindness. We are also very thankful to her friends who visited, wrote letters, or showed affection from afar. Your friendship and loyalty are profoundly moving. May was very happy and proud to have reached 100 years of age. No one ever loved a round odometer number like she did. What a great run she had. For any who would wish to make a charitable donation in May’s memory, her favorite charities included: Anne Carlson Center (annecarlson.org); Ahlzheimer’s Association (alz.org); Eventide Foundation (eventide.org); and Lutheran Church of the Good Shepherd, 4000 28th Street South, Moorhead, MN 56560 . A private funeral and burial are planned for Thursday, May 28, 2020. Visitation for the public will be held Wednesday, May 27, 2020 from 3pm-6pm in Korsmo Funeral Chapel, Moorhead.

May Eleanor (Berge) Bredeson passed away peacefully Saturday, May 23, 2020 in Eventide on 8th in Moorhead, where she had lived since December 2011, following a stroke. Her death came while she was in the care of the nursing home&#8217;s COVID-19... View Obituary & Service Information

The family of May E. Bredeson created this Life Tributes page to make it easy to share your memories.

Send flowers to the Bredeson family.