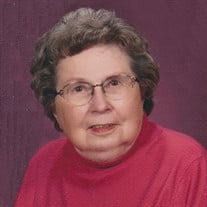 Click the following link to watch a recording of Mary Jane's servcie https://portal.midweststreams.com/services/iframe/14173 Mary Jane was born February 3, 1928, in Bismarck, ND, the daughter of Ray and Alexandrine (Kruger) Peterson. She was raised on a cattle ranch in southwest North Dakota, near Marmarth. Mary Jane was a child of the depression which influenced a lifetime of making do with less and keeping things that might be useful someday. She spent one year attending Montana State University in Bozeman, MT, before moving to Mobridge, SD, in 1948. It was in Mobridge where she met her future husband, Dick Phillips. Mary Jane and Dick were married August 22, 1948, and three children were born to this union. The family moved frequently, living in Mobridge, Bismarck, and Dickinson, ND, before settling in Moorhead, MN, in 1964. Mary Jane was very proud of going back to college from 1959 to 1960 and receiving her teaching degree from Dickinson State College. She taught at several one room schools in the Dickinson area, just like her mother had been a one room school teacher in the 1920’s. Mary Jane and Dick were avid square dancers and were members of clubs in every town that they lived. They camped every weekend in Minnesota during the summers and loved traveling to warmer area’s of the United States and sold various products at flea markets and air bases. They later had a trailer in Apache Junction, AZ, and enjoyed friends and the nice weather there. Mary Jane was a loving mother, grandmother, and great-grandmother. She loved to socialize with family and was proud of their accomplishments. Mary Jane lived at Sheyenne Crossing Assisted Living for several years and died at Bethany on 42nd, on November 6, 2020, at the age of 92. She is survived by her children, Rick (Julie), Ray (Cathy), and Rita (Ron) Lattimore; grandchildren, Dan (Wendy), Sarah (Mike) Welken, Amy (Todd) Vangerud, Rachel (Andy) Kinneberg, Kim (Steve) Refling; step-grandchild, Ricky Bouslaugh; nine great-grandchildren; three step-great-grandchildren; and sister, June Lord. She was preceded in death by her parents; husband, Dick in 1996; and brother, James. A Visitation for Mary Jane will be on Wednesday from 5:00 PM until 7:00 PM in Korsmo Funeral Chapel, Moorhead. Her Graveside Service will be on Thursday, November 12, 2020, at 11:00 AM, in the Riverside Cemetery Mausoleum, Fargo. Due to CDC Covid-19 restrictions, social distancing and masks will be required. (Korsmo Funeral Service, Moorhead, MN)

Click the following link to watch a recording of Mary Jane's servcie https://portal.midweststreams.com/services/iframe/14173 Mary Jane was born February 3, 1928, in Bismarck, ND, the daughter of Ray and Alexandrine (Kruger) Peterson. She was... View Obituary & Service Information

The family of Mary Jane Phillips created this Life Tributes page to make it easy to share your memories.

Click the following link to watch a recording of Mary Jane&#39;s...

Send flowers to the Phillips family.