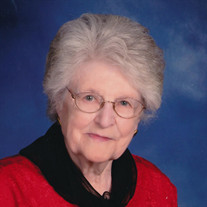 Marlys Audrey Mertz, 91, died on Sunday, December 8, 2019, at her apartment in Linden Tree, Eventide, Moorhead, MN, surrounded by family and friends in the care of Ethos Hospice. Marlys Audrey Mathison, was born August 27, 1928, (her mother’s birthday) on the family farm south of Hickson, ND, to Ole and Minnie (Johnson) Mathison. She was confirmed at Christine Lutheran Church, Christine, ND. Marlys attended Hickson Public School, Comstock (MN) High School, and graduated from Moorhead High School. She worked at the Bluebird Cafe in Moorhead, Gardener Hotel, Fargo, ND, and at the Barn in the Frederick Martin Hotel, Moorhead. She was united in marriage to Ray Mertz in June of 1952. Together, they raised 4 children at their home in north Moorhead. Marlys was a member of Our Savior’s Lutheran Church, Moorhead, where she was a frequent volunteer at Our Savior’s Quilters and other activities at the church. She and her husband, Ray, were also members of the DAV auxiliary, Eagles, Sons of Norway and other organizations. They enjoyed doing a variety of volunteer activities together. In 2006, Marlys was diagnosed with ovarian cancer, which she fought valiantly along with other serious health concerns over the years. A special thank you to all the doctors, nurses, hospice personnel, Eventide personnel and all the other people who have been involved in her care. Much gratitude to you all. She moved to Eventide in 2009, and enjoyed her time there participating in bingo, arts and crafts, attending musical events, cooking events and visiting with old friends as well as new. Marlys is survived by her son, Michael Mertz; two daughters, Cathy Fortin and Sheri (Brent) Wien; grandchildren, Adam, Enoch, Rachel, David and Philip; 20 nieces and nephews; brother, Ralph Mathison; and sisters-in-law, Lois, Mary and Alice Mathison. She was preceded in death by her parents; husband, Ray; son, Richard; brothers, Joseph, Maynard, Oliver, Howard, Arthur and Allen; and her sister, Inez Bosley. A visitation for Marlys will take place on Sunday, December 15, 2019, from 5 PM to 7 PM, with a prayer service at 7 PM in Korsmo Funeral Chapel, Moorhead. Her funeral service will be Monday, December 16, 2019, at 2 PM in Our Savior’s Lutheran Church, Moorhead. Burial will be at Riverside Cemetery, Moorhead.

The family of Marlys A. Mertz created this Life Tributes page to make it easy to share your memories.

Send flowers to the Mertz family.